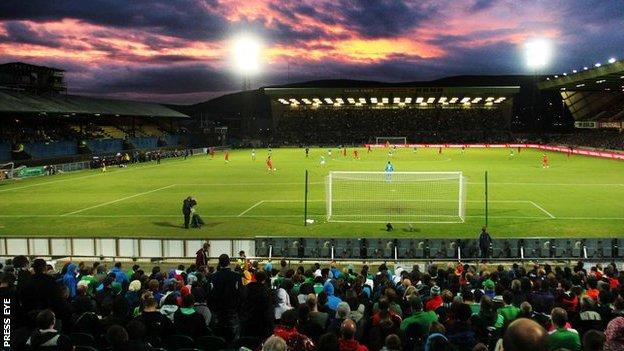 The green and white army march along the narrow terraced streets. Feet pound the pavements as fans march expectantly towards Windsor Park.

A clamour of excitement, banter and chanting is broken by the rattle of a charity collection box as the crowd climbs the steps of the railway bridge.

Programme sellers bellow their sales pitch, diesel generators drone beside chip vans and, over the "hub bub" of the fans, beyond the stand you can hear the stadium PA system blaring out rock music whipping up the atmosphere.

The excitement is palpable, Portugal's Cristiano Ronaldo is in town.

The world's first £80m footballer is about to take the stage in Northern Ireland's main football arena for a World Cup qualifier.

The arena, though, is a blast from the past. A crumbling relic from a long-gone era and barely fit to be considered a major sporting venue.

Things are about to change and the bulldozers are about to move in. Windsor Park, home of Irish League club Linfield and Northern Ireland, will never look the same again.

Two new stands are to be built, the other two spruced-up and the capacity increased to 18,000 - in a £26m redevelopment funded by the government.

So, as long as things go as planned, this is the last big match night at Belfast's antiquated arena.

Still, there is something quaint about this sub-standard, out-of-date ground. Character, maybe.

Tension mounts as kick-off draws near. In the stand, the crescendo of noise that greets the teams frightens a young boy attending his first game.

His dad holds his hand, pulls his beanie hat over the child's ears and reassures him that it's ok, a ritual that the decaying south stand will have witnessed countless times.

A shrill blast of the ref's whistle and the David versus Goliath match is under way.

The home supporters bounce in unison on the kop. A seething mass of green and white, collectively will their team to claim the scalp of another footballing super-power.

Ronaldo becomes the focus of the crowd's ire, jeered as he loses out in the first tackle. Chants of "Who are you?" flow around the ground. Tempting fate perhaps.

Each Northern Ireland attack is applauded feverishly. Every little victory greeted with roars of approval.

A deafening din rattling in the rafters of the stand, and then, stunned silence.

Portugal take the lead. It's hard to take but the fans have been here before.

A period of pressure by the team in green reignites the passion and Gareth McAuley's towering header equalises and sparks scenes of frenzied celebration in the crowd.

A red card for a headbutt sees Portugal reduced to 10 and the crowd sense an upset as they chant cheerio to Helder Postiga.

Into the second half and the rain has not dampened the supporters' spirits.

Jamie Ward bundles the ball into the Portuguese net, sending the crowd wild as Northern Ireland take the lead.

Ten against 10 as Chris Brunt sees red and the green and white army are now slightly more cautious.

Ronaldo heads the visitors level and the atmosphere is more subdued. The taunts of "Messi" and "one Gareth Bale" seem to have sparked him into action.

He then heads them into the lead. For once the GAWA fall silent and the visiting fans can be heard for the first time.

Kyle Lafferty is sent off for a late tackle and just as fans are thinking it cannot get worse, Ronaldo makes it a hat-trick, 4-2, and he has silenced Windsor.

There is applause from both sets of fans as Portugal's hero leaves the pitch. A mutual respect shown for talent.

So, there was to be no great upset, no last Windsor glory night in this qualifying campaign.

Now the fans are all but gone, except the last few milling around, hoping for players' autographs.

As I leave, the floodlights are switched off, the electric buzz of the generators gone. The old stadium lies silent.

Crossing the bridge, I look back at the silhouette of the stands jutting into the Belfast darkness. Memories flood back.

I'm suddenly back in my childhood, my first trip to Windsor, squeezing through the turnstile, ticket stubs ripped, programme purchased, holding my dad's hand, making our way through crowds of fans, taking our seats, frightened by the intense roar of the crowd.

Turning away, I realise that it may be the last time I see the familiar football ground that I had grown up with.

Hopefully, the next time I cross the railway bridge for an international match, the redeveloped Windsor will be open and ready for more glory nights and new memories.