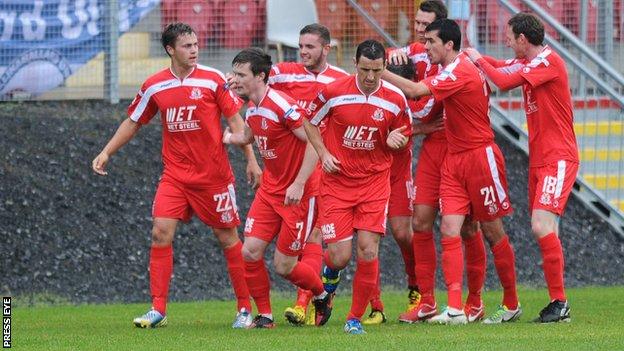 Portadown registered the biggest Irish League win for 47 years in the Shamrock Park rout of Ballinamallard, who finished with nine men.

Darren Murray added the fourth and Dwayne McManus was sent off before goals from Braniff, McMahon and Twigg.

Portadown equalled the record set by Distillery in 1966, when the Whites defeated Bangor by the same scoreline.

It was just 3-0 at the break with McMahon tapping in the opener from a rebound after Murray's chip hit the bar.

Twigg's lob doubled the lead before Braniff headed in at the nearpost from a Johnny Black corner.

The Mallards had conceded just three goals in their opening five league games and a comeback was still on until the avalanche of goals started on 65 minutes.

Murray rifled home the fourth and McManus was dismissed after 70 minutes for two yellow cards.

Braniff's superb 30-yard strike into the top corner was followed by McMahon firing in and Twigg's header made it 7-0.

Braniff completed his treble from the penalty spot after McManus was dismissed for handling on the goal-line.

Murray headed in and new signing McStay brought the score to double figures before Twigg netted a minute from time for his hat-trick.

"We've been playing like that all season but not taking our chances," said Ports manager Ronnie McFall.

"The difference here was that we took our opportunities - I'm just glad to get the three points and keep a clean sheet.

"The result is pleasing after the defeat at Ballymena in midweek."

Portadown move up three places into second while Ballinamallard slip back to 10th place.