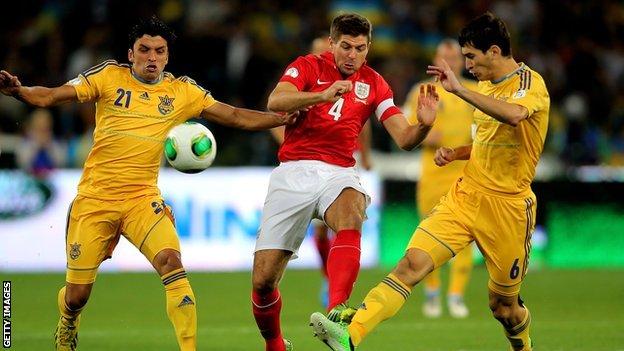 England secured a precious point from a mediocre World Cup qualifier in Ukraine to edge towards next summer's showpiece in Brazil.

Manager Roy Hodgson will be delighted England have their fate in their own hands as they know victory in their final two Wembley qualifiers against Montenegro and Poland in October will guarantee automatic qualification.

There was little else to enthuse about from a performance that did the job but could also be used as a prime exhibit to support new Football Association chairman Greg Dyke's claim that England are not realistic contenders to win the World Cup in 2014.

England's draw was built on the solid foundations set by a magnificent performance from Chelsea defender Gary Cahill, particularly in the early stages when they were riddled with uncertainty as Ukraine applied pressure.

Ukraine, however, suffered from a familiar failing of running out of steam following a bright start and, ultimately, England survived in relative comfort.

England's performances in the group stage have been undistinguished with their only victories coming against the minnows of Moldova and San Marino.

And this simple fact should serve as a warning against any complacency about those final two games that hold the key to their qualification.

England's travelling fans stayed behind in Kiev's vast Olympic Stadium to celebrate the result as almost 70,000 Ukraine fans trooped away fearing they will now be consigned to the play-offs.

As expected, James Milner replaced the suspended Danny Welbeck and it was a landmark night for Frank Lampard as he won his 100th England cap.

In a predictably hostile atmosphere, England displayed early nerves and goalkeeper Joe Hart, in particular, came under stern examination from the hosts.

Hart, who has suffered criticism for his recent form for club and country, survived an early penalty appeal when he slid out to meet Roman Zozulya, who fell under the challenge but referee Pedro Proenca showed no interest.

Hodgson's side gave Ukraine anxious moments of their own as they forced a succession of early corners with Cahill seeing one header deflected over and another swept off the line by Artem Fedetskiy.

Hart caused more concern for England's defence, which relied so heavily on Cahill early on, when he juggled a loose ball unconvincingly but was finally able to clear.

The visitors were struggling to impose any authority in midfield, with Jack Wilshere a particular disappointment as too often he was shrugged off the ball and conceded possession easily.

Who was McNulty's man of the match?

Hodgson's side had, however, resisted Ukraine's early pressure and captain Steven Gerrard was not far away with a long-range effort that landed on top of the net with goalkeeper Andriy Pyatov scrambling.

The second half was descending into a desperate affair and both managers made changes after 68 minutes in an attempt to inject some quality into proceedings.

England had restricted Ukraine in the second half but Kyle Walker's ill-advised foul on Zozulya, for which he was shown a yellow card, gave Yevgeni Konoplienka an opportunity 20 yards out. The free-kick was on target but took a crucial glance off Phil Jagielka and went inches wide.

Konoplianka then headed straight at Hart from a corner, a clear opportunity that left the Ukrainian holding his head in despair as play swept to the other end.

Lampard had a late chance to give England a win only to steer his header wide - but Hodgson will have been satisfied with a point that will be crucial if his side can now complete the task at Wembley next month.