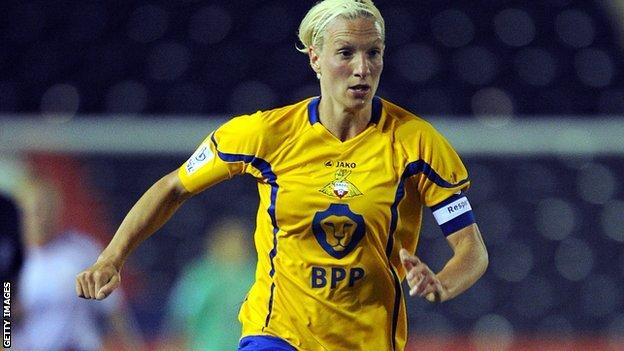 England striker Toni Duggan gave Everton the lead just before the interval, but defender Little's goal midway through the second half was well deserved.

Donny had the better of the first half, strikers Jess Sigsworth and Katie Brusell going close with early efforts and Little hitting the post.

But as the opening half went into stoppage time the visitors took the lead through a deflected shot by Duggan.

That was a real blow for the Belles, but they bounced back after the interval and equalised when Little headed home winger Sue Smith's 65th minute cross.

As the game moved into its closing stages the home side pressed for a winner.

But in the 83rd minute they were almost undone again by Duggan, whose six-yard shot was brilliantly saved by goalkeeper Nicola Davies.

The Belles then went desperately close to clinching victory in the first minute of stoppage time, substitute Naomi Chadwick's header glancing off the far post.

Everton sub Simone Magill wasted a glorious chance to earn her side three points right at the death, however.

Striker Nikita Parris had a shot blocked by Davies and Magill, just a couple of yards out, lifted the loose ball high over the bar.

The result left Everton fifth in the table and lifted Donny to within one point of second-bottom Lincoln as they look to avoid the WSL's wooden spoon.