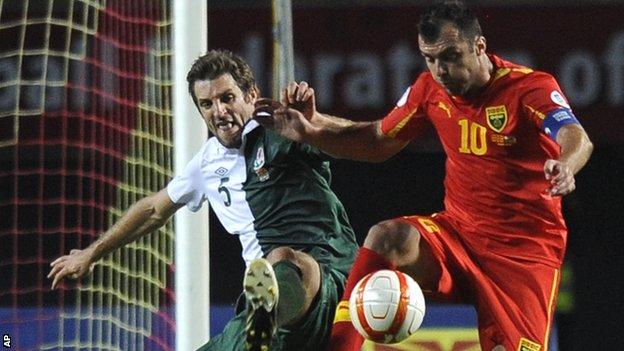 The reverse fixture 12 months ago ended in a humiliating 6-1 hammering in Novi Sad and Wales come into the game on the back of Friday's 2-1 loss in Macedonia.

"We owe Serbia one," said Wolves defender Ricketts, who won his 50th cap in Skopje.

"You always look back at sides that have beaten you like that and they are the results you want to avenge."

Ricketts ended the defeat in Macedonia limping and is one of the injury concerns for Wales boss Chris Coleman ahead of the game at Cardiff City Stadium.

Crystal Palace midfielder Jonny Williams is also a major doubt after having to come off in Skopje, but Ricketts believes there is growing strength in depth in the Wales squad.

"We know there is huge talent in this squad and a number of youngsters with a lot of caps and a lot of experience," Ricketts said.

"There are four or five players coming through who played [against Macedonia] and will all go on to win 50 caps.

"The future is still looking good, the attacking players we have are very special and if we control the game like we did against Macedonia then more often than not we will win."

The loss in Skopje ended Wales' slim hopes of making the finals and they must beat Serbia to have any hope of finishing third in Group A and boosting their seeding when the draw for Euro 2016 qualification is made.

"I think we will be in the mix for Euro 2016 but we have not written this campaign off yet," Ricketts added.

"People may say we don't need to worry, but we want to win these games and finish as high as we can."

If he shakes off his knock, Ricketts, who has featured at centre-half for Wales despite being more accustomed to full-back, will have a new defensive partner as captain Ashley Williams is ruled out of the Serbia game after picking up a booking in Skopje.

"Ash is a great player and I have known him for a very long time," added Ricketts. "He was first part of this squad when he went to Stockport and he has gone on to Swansea and everyone knows how well he has done there.

"I enjoy playing alongside him, we complement each other's games well and we know each other off the pitch. But we have more than adequate people in the squad, like Danny Gabbidon, who can come in and play."

Reading's Hal Robson-Kanu, who missed the defeat in Skopje through suspension, is available for Tuesday's game in Cardiff.

Gareth Bale, who moved from Tottenham to Real Madrid for a world-record £85.3m fee, could play some part against Serbia after he was kept on the bench in Macedonia as he recovers from a foot injury.