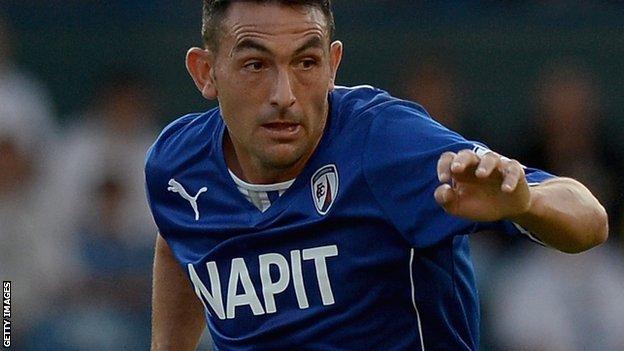 Gary Roberts scored one and created another to send Chesterfield four points clear at the top of League Two with victory over AFC Wimbledon.

The midfielder volleyed the hosts ahead from close range, before swinging in a free-kick for Sam Hird to head home after the break.

Earlier, Dons striker Michael Smith scooped a chance to equalise over the crossbar from six yards.

He was also denied by a stunning double-save from keeper Tommy Lee.

The Spireites got off to a bright start when Marc Richards' effort found the back of the net after six minutes but it was flagged away for off-side.

Smith called Lee into action for the first time on 18 minutes and continued to be a menace, with the goalkeeper again foiling the Charlton loanee late on.

"I thought it was outstanding in terms of the football we played.

"Great credit to Wimbledon to come here and make a game of it.

"It shows the commitment of these players, where Tommy Lee's made some outstanding saves.

"And right at the end Liam Cooper's threw his neck on the line and Sam Herd - his will to not concede a goal, full credit to the players."

"I think we wanted to come and have a go, I think I could have tactically shut up shop, I could have done a load of work during the week and I think we would have given them a really tight game had I gone that route.