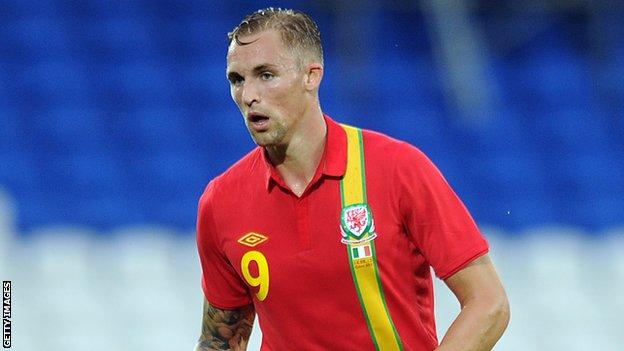 Midfielder Jack Collison wants Wales to finish their World Cup campaign on a high as they start to turn their attention to the Euro 2016 qualifiers.

The 2-1 defeat in Macedonia was Wales' fifth loss of the campaign.

And Wales must beat Serbia on Tuesday to have any hope of finishing third in Group A and boosting their seeding when the draw for Euro 2016 qualification is made early next year.

"It's up to us to get as many points as possible," West Ham's Collison said.

Chris Coleman's side host Serbia at Cardiff City Stadium before the campaign concludes with games against Macedonia and Belgium in October.

Collison, 24, felt Wales were unlucky not to return from Macedonia with at least a point, but says Tuesday's game is a chance to put things right.

"It would be disappointing if we had to go back to our clubs and not meet up for another month," Collison added.

"Luckily we can regroup, get together and go over the game, take out of it what we can and look to put into practice what we've learnt on Tuesday [against Serbia].

"Obviously we want to keep up with the good performances.

"But it's also important we put points on the board and finish as high up as possible and look to qualify for the Euros now."

Wales will be without captain Ashley Williams for Tuesday's game against Serbia after the Swansea City defender picked up a yellow card in the defeat in Macedonia.

Crystal Palace midfielder Jonny Williams has been ruled out after coming off in Skopje, while Wolves defender Sam Ricketts is a doubt after he picked up a knock.

Reading's Hal Robson-Kanu, who missed the Macedonia defeat through suspension, is available but Gareth Bale is again unlikely to start.

World-record signing Bale was named on the bench for the Macedonia game and manager Coleman said the winger's lack of match fitness after injury meant he was never going to play.

But Collison hopes to see Bale play some part on Tuesday against a side who thumped Wales 6-1 last September in Novi Sad.

"It's great to have him around, training and that, so if we can get him fit and get him out there it's going to be a massive boost for us," Collison added.