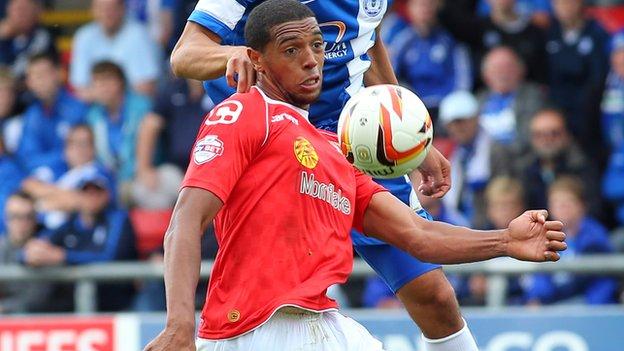 Crewe Alexandra striker Vadaine Oliver was quick to praise boss Steve Davis after breaking his duck for the club.

Oliver and co-striker A J Leitch-Smith made the most of being paired together for the first time, both netting in the 2-2 home draw with Peterborough United.

But, having scored on Saturday on only his third start, Oliver insists it was reward for Davis in sticking by him.

"Some managers are afraid to change things, but they give you a chance here," Oliver told BBC Stoke.

"If you show what you're about here and you deserve a start, the manager will give you it."

Oliver hit the first of Crewe's two goals in six first-half minutes to also earn his first man-of-the-match award since his summer move from Conference Premier side Lincoln City.

The only downside being that, after pulling one back on half-time, Posh completed a comeback with a last-minute equaliser.

"We were unlucky not to get the result we deserved," added Oliver.

"It would have topped it off if we'd won, but to get the personal accolade, I'm happy with that.

It's last season since he scored a goal. Any striker would suffer because of that

"I'd got a few goals in pre-season, but it was good to finally get one when it mattered.

"The partnership with me and AJ worked well. I'm just hoping I can keep my place now."

Crewe manager Davis was pleased with the performance of both strikers, after his team had fired successive blanks in their two previous league outings.

"They worked hard and scored two great goals," he admitted.

And he is looking at Leitch-Smith, in particular, to build on the confidence boost of scoring for the first time in 21 games since 5 February.

"It's about time he had a season in which we were talking about him.

"It's last season since he scored a goal. Any striker would suffer because of that.

"I had a really good chat with him before the game about being more selfish and more positive around the box. Hopefully that helped him.

"He worked very hard for the team and made a lot of runs in behind, even though he did not always get picked out. And he can finish."