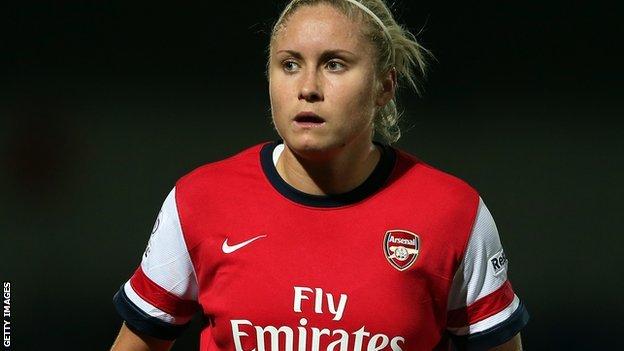 Arsenal's hopes of retaining the Women's Super League crown took another big hit as they were held to a goalless draw by Bristol Academy.

Three days after also being held to a goalless stalemate by Lincoln, the Gunners are now three points behind league leaders Liverpool with just two games of the season remaining.

They may even have to settle for third place as Bristol have a game in hand.

The champions have simply lost their touch in front of goal.

They should have gone ahead after just three minutes, but unmarked England striker Ellen White sent a free three-yard header over the bar.

Captain Steph Houghton went closer with a firm header that was acrobatically turned over the bar by diving goalkeeper Siobhan Chamberlain.

Arsenal keeper Cherrie Rowlands, making her debut, had to make a brave block at the feet of striker Natasha Harding just before the half-hour.

But at the other end, another chance went begging as Gunners' striker Danielle Carter sent a 10-yard shot over the top.

Playmaker Kim Little twice went close to scoring from long range as Arsenal built up the pressure after the break.

They almost went behind on the hour, however Spanish striker Natalia fired an 18-yard volley narrowly wide.

But the Gunners were soon back on the offensive and only another fine Chamberlain save prevented White's 63rd minute drive from hitting the net.

Five minutes later though, they were fortunate not to concede a penalty when left back Emma Mitchell appeared to upend Harding.

And as Academy pressed again, Rowlands had to make a scrambled save from Harding's low 12-yard shot.

Harding then missed the target in stoppage time when a victory-clinching goal would have put them ahead of Arsenal in the table and almost certainly ended the champions' title chances.