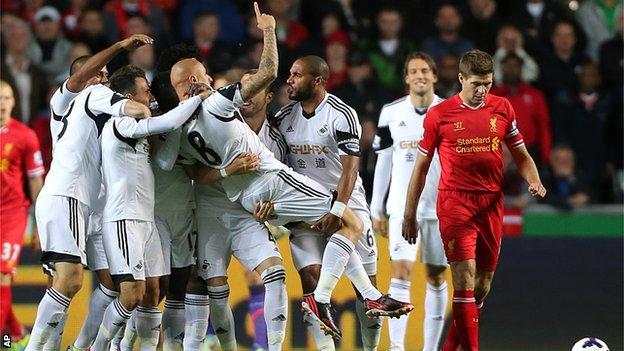 Swansea midfielder Jonjo Shelvey had a hand in all four goals as his old club Liverpool moved back to the top of the Premier League with an exciting draw.

The hosts led after 87 seconds when Shelvey curled into the bottom corner.

"Jonjo Shelvey scored a great goal, then to make two awful passes, he was totally at fault for both Liverpool goals with his sloppy play.

"He bounced back, tried to make tackles, and break into the Liverpool half. His spirit speaks volumes about the character of the man."

Reds debutant Victor Moses steered in after another mistake from Shelvey, who then headed the ball on for Michu to equalise and end the Reds' 100% start.

The Spaniard's first Premier League goal of the new season provided the final twist in an entertaining game at the Liberty Stadium.

Liverpool might have dropped their first points this season, but the draw still allowed them to leapfrog Arsenal and Tottenham to the top of the Premier League.

Swansea are 13th after taking four points from their opening four matches.

It was certainly an evening to remember for England Under-21 international Shelvey, who left Anfield for the south Wales club in the summer.

The £5m signing put the Swans ahead when he left new Reds defender Mamadou Sakho flat-footed to calmly stroke a left-foot effort past goalkeeper Simon Mignolet.

Liverpool had not previously conceded in the Premier League and they were gifted a way back into the game little over 100 seconds later by Shelvey.

His careless pass back towards goalkeeper Michel Vorm was seized upon by Sturridge, who netted his fourth top-flight goal of the season with a clinical finish.

The Reds dominated the opening half hour as the vibrant trio of Moses, Philippe Coutinho and Sturridge pulled apart the Swansea defence with pace and precision. And they should have doubled their advantage when Moses and Sturridge combined.

On-loan Chelsea winger Moses surged past two defenders near the left corner flag and dinked in a perfectly weighted cross towards an unmarked Sturridge.

The England striker seemed certain to score but his header was directed too close to Vorm, who made a magnificent save.

Shortly before half-time, they did take a deserved lead. Shelvey sloppily handed possession to Moses, who drove at the backpedalling Swansea defence before accurately shooting into the bottom corner from the edge of the penalty area.

Victory would have given Liverpool their best start to a season since 1990-91 and for the opening hour they seemed firmly on course to achieve that.

But Coutinho's departure early in the second half with a shoulder injury following a robust challenge from Swans skipper Ashley Williams disrupted their fluency.

Swansea, playing the first of seven games in 21 days, had not created any clear-cut second-half chances before Michu's leveller, but they had been encouraged to press forward by Liverpool's willingness to sit back on their lead.

They were rewarded when Shelvey flicked a right-wing cross into the path of Michu, who swept a first-time shot beyond Mignolet.

The leveller switched the momentum of the match firmly in Swansea's favour and, as the encounter moved into the closing stages, Michael Laudrup's men looked the likeliest to grab a dramatic winner.

"We had to perform better in the second half and the boys did a good job.

"We got the equaliser, we could have won the game but I'm pleased with the result after all."

"I thought for the first 65 minutes we were very good. We showed incredible character to get back level so soon after they scored.

"I was disappointed with their second goal and then the momentum changed for the last 25 minutes and we had to show character and resilience.

"But we showed tonight our game is getting better and we have the character to get a lot of results."