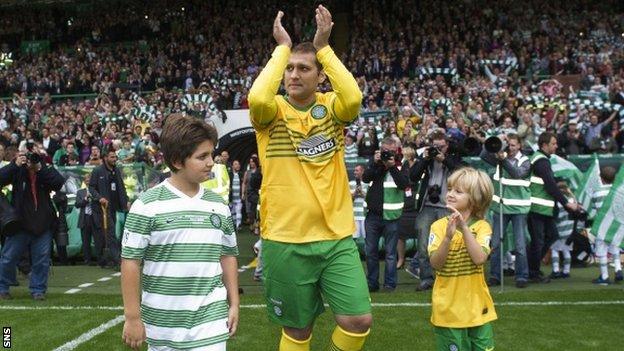 Kenny Dalglish and Martin O'Neill paid tribute to Stiliyan Petrov after an emotional charity match at the home of their former club, Celtic.

A capacity crowd of 60,000 witnessed the game organised by Petrov, who retired from the game after a year-long battle with leukaemia.

Former Celtic managers Dalglish and O'Neill were in charge of two sides of footballers and celebrities.

They said it was a fitting tribute to "a very brave man".

Petrov, who played for Celtic from 1999 until 2006, was struck by illness while playing for his next club, Aston Villa.

The former Bulgaria international had intensive bouts of chemotherapy treatment and is now in remission.

He is working to help others who have had similar experiences and the principal beneficiaries from Sunday's game were the Stiliyan Petrov cancer charity foundation and the Trussell Trust, which run foodbanks across the UK.

At the end of match in which the Stiliyan Petrov XI defeated a Celtic XI 5-3, Petrov completed a lap of honour with his two children.

"You showed the world how special this place is," he told fans.

"Thank you for standing by me when I had the hardest time in my life."

Dalglish, who was in charge of the Petrov XI, said: "The support he has had, first and foremost from his family but also from the footballing family, at Aston Villa and Celtic, has been unbelievable.

"The reception they gave him was a fitting tribute to a very strong man who is an example to everyone else who gets a bit of bad news.

"The turnout was fantastic and a fitting tribute to a really brave man.

"He is a man of tremendous courage and determination and I just hope that it pays off."

O'Neill, who took Petrov to Aston Villa and was in charge of the Celtic XI, added his own praise of Petrov.

"I seen Stiliyan a number of times and he was not in great shape and fighting strongly," he said.

"I knew the professor he was working with, so I knew he was in good hands, but you still have to battle through.

"I am just astonished at the reception he got. I really shouldn't be, but it was absolutely fantastic and he deserves it.

"I have enormous respect for him and his generosity in every aspect of life is phenomenal."

Henrik Larsson scored a penalty for the Celtic XI with another former Hoops striker, Pierre van Hooijdonk, and actor Warren Brown also on the scoresheet.