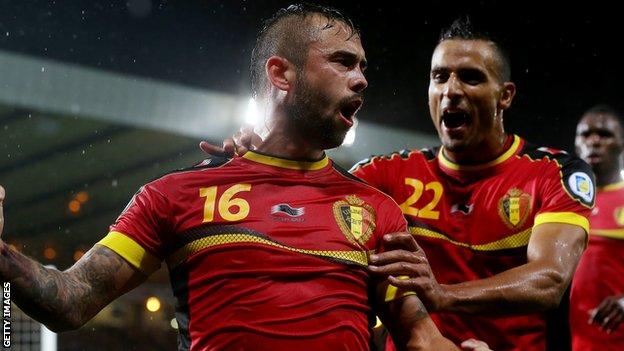 Germany, Belgium, Switzerland, Bosnia-Hercegovina and Russia could become the next nations to secure automatic qualification to the 2014 World Cup.

Belgium sit five points ahead of Croatia in Group A, with two games to play. The two teams meet on 11 October, with Belgium needing to avoid defeat to make the summer trip to Brazil.

Switzerland need to beat Albania to finish top of Group E. Even if they draw, Iceland will need to thrash bottom-placed Cyprus to stand any chance of overhauling Ottmar Hitzfeld's side on goal difference at the end of the campaign.

Germany need to avoid defeat at worst against Republic of Ireland to qualify as Group C winners.

Japan, Australia, Iran, South Korea, Italy and the Netherlands already know they will be joining hosts Brazil at the 2014 World Cup finals

Bosnia and Greece are locked on 19 points at the top of Group G. Even if Greece do not drop points against Slovakia, Bosnia's far superior goal difference means victory next time out against Liechtenstein will all but guarantee them automatic qualification.

In an unlikely turn of events, Russia could secure top spot in Group F if they beat Luxembourg and Portugal suffer a shock loss at home to Israel.

The winners of each group qualify for the World Cup, while all bar one second-placed team (the one with the worst record against teams ranked first, third, fourth and fifth) will reach the play-offs.

Italy and the Netherlands have qualified for the World Cup, with second place up for grabs in seven of the nine groups.

Belgium and Croatia are the runaway leaders and the only teams who can finish in the top two. They meet in the next round of matches, with Belgium needing to avoid defeat away from home to guarantee top spot.

With Italy already guaranteed World Cup qualification, the race for second place remains tight. Bulgaria - who possess a significant goal difference advantage over their direct rivals - are a point above Denmark in second with two games remaining and will stay in control if they beat Armenia.

Denmark play group winners Italy at home. If Bulgaria win and they lose, Bulgaria will secure second place, while a draw in the same circumstances will require a huge swing in goal difference in the final fixture.

Armenia and Czech Republic are long shots to finish in a potential play-off spot, with both sides locked on nine points. To stand any hope of making it, the former must beat Bulgaria and the latter bottom-placed Malta.

Behind group leaders Germany, the race for second place involves Sweden, Austria and the Republic of Ireland.

Sweden are three points ahead of Austria, who they host in the next round of games. If the home side is victorious, they will guarantee second place.

Ireland travel to probable group winners Germany. Lying six points off Sweden with an inferior goal difference, they are major underdogs to qualify.

Netherlands have comfortably secured top spot, but the battle for second is up for grabs. Second-placed Hungary travel to the table toppers, knowing a surprise victory could see them into the play-offs with a game to spare.

Turkey and Romania are a point behind Hungary after eight games played, with Turkey boasting a considerably superior goal difference to Romania.

They look certain to take advantage of any dropped points from Hungary, as Turkey travel to also-rans Estonia and Romania make the trip to bottom-placed Andorra.

Leaders Switzerland can qualify for Brazil if they win away to Albania. The teams sitting second to fifth are separated by only three points with two games remaining.

Second-placed Iceland host bottom-placed Cyprus, while third-placed Slovenia and fourth-placed Norway face each other. No run of results can see a nation guarantee themselves a potential play-off place.

Leaders Russia and second-placed Portugal are separated by a point with two games to play. Both face fixtures against minnows, with Russia travelling to Luxembourg - who beat Northern Ireland 3-2 in their previous qualifier - and Portugal hosting Israel.

A victory for Israel will see them close to within two points of Portugal, with a game to play.

Bosnia-Hercegovina and Greece are locked on 19 points, and are guaranteed to finish in the top two places with two games to play.

Bosnia possess a far superior goal difference. They host Liechtenstein next, knowing victory will all but secure automatic qualification no matter what Greece do against Slovakia.

If England beat Montenegro at Wembley and Poland beat Ukraine, then Roy Hodgson's side will be all but qualified for the World Cup. England would be three points ahead of Poland with a superior goal difference.

Moldova will be hoping to beat minnows San Marino to condemn them to bottom place.

Spain and France are guaranteed to finish in the top two places.

Spain, who are top on goal difference, need four points from their remaining two games at home to Belarus and Georgia to guarantee qualification. France - who sit out the next round of qualifiers - finish their campaign at home to Finland.