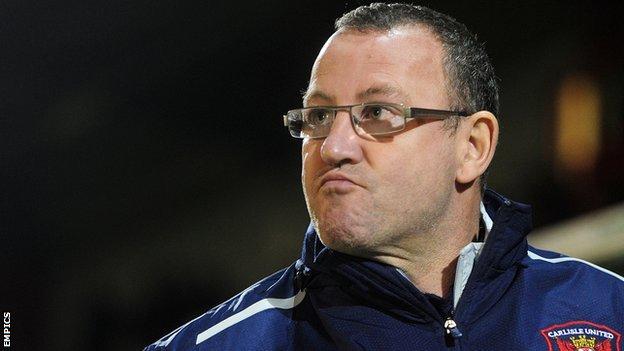 Carlisle have sacked boss Greg Abbott after a poor start to the season.

United, third from bottom in League One, have taken just two points from their first six matches and

The 49-year-old was the third longest-serving manager in English football, having taken charge late in 2008.

"Unfortunately the continued dip in attendances, in direct relation to results, left all parties with no other option," said a club statement.

While assistant manager Graham Kavanagh and youth team coach David Irons will take temporary control of the first team at Brunton Park, the board are hopeful of appointing a successor within the next fortnight.

"We would really like to get to a position where we can be near an appointment if it's feasible before the Stevenage game [on 21 September]," managing director John Nixon told BBC Radio Cumbria.

"We put the press release out by 10:30 BST this morning and the first applicant had come in within 10 minutes, and they've been coming in throughout the day."

In English football, only Arsenal's Arsene Wenger and Exeter's Paul Tisdale had been in managerial positions longer than Abbott prior to his dismissal.

Abbott, who was appointed as Carlisle's permanent boss in December 2008 having been given the role in a caretaker capacity the previous month, is the first manager to be sacked in the 2013-14 season.

of the campaign, conceding 13 goals in the process, and although the team achieved draws at Colchester and Brentford, defeat by Vale at the weekend

"In the end I think the supporters made their feelings known, with results the way they have gone it's been disappointing," former United midfielder and BBC Radio Cumbria pundit Chris Lumsdon said.

"You never want someone to lose their job, and people might now look back and respect some of the things he's done in the past.

"But it seems it needed freshening up and it's disappointing for Greg."

Abbott twice took Carlisle to Wembley, losing the final of the Football League Trophy in 2010 to Southampton, but returning a year later to beat Brentford and win the competition.

He also stabilised the club in League One, guiding them to a highest finish of eighth in 2011-12.