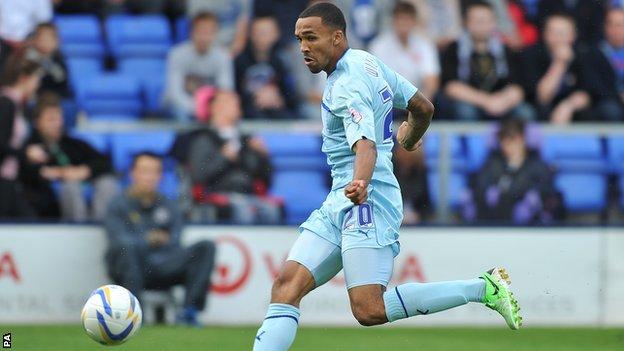 Coventry City's supporters might not be too keen on Sixfields, judging by the size of crowds they have been getting at their new base in Northampton.

In three appearances at Sixfields, he has now netted twice per game to help him stand top of the country's scoring charts on eight goals for the season.

"He's got the bit between his teeth. He's finishing with great confidence and belief," said boss Steven Pressley.

Sunday's two match-winning strikes to see off Colchester United, who were also on the receiving end when Wilson scored his first Sky Blues goal in March, had Pressley purring his praise.

"He was faced one on one on both occasions and, for the second goal, his link play with Leon Clarke was outstanding.

"Leon played a brilliant pass and he showed great composure to finish."

Wilson is quick to acknowledge the debt he owes to the experienced, much-travelled Clarke, who has been no slouch himself with four goals this term, having fully recovered from the ankle surgery that sidelined him in March just three months (and 10 goals) into his Coventry career.

"I love playing with Leon," Wilson said. "We've got an understanding of each other's play. I know what he likes and he knows what I like.

"The way we play we create a lot of chances, which is great for any striker. I get the chance to press defences with my pace."

All I want is to keep getting results for the team and keep scoring goals. If, at the end of the season, I'm still up there I'll be proud

Coventry-born Wilson made his professional debut for his hometown club as a 17-year-old in August 2009, as an extra-time substitute in a League Cup tie against Hartlepool.

He then spent three months on loan at Kettering the following season before a further month with Tamworth in January 2012.

But it was only after being given a regular chance by caretaker boss Lee Carsley, following Mark Robins' move to Huddersfield in February, that Wilson began to establish himself in the first-team squad.

He was a regular substitute over the second half of last season, coming off the bench to score a stunning first goal for the club against Colchester, before being allowed by Pressley to start three of the Sky Blues' final four games.

"The back end of the season, and getting the chance to make a few starts, helped me massively," said Wilson.

"But I've now just got to try to keep doing what I'm doing.

"I'm just happy to be playing and scoring and the goals are a bonus.

"All I want is to keep getting results for the team and keep scoring goals. If at the end of the season I'm still up there I'll be proud."