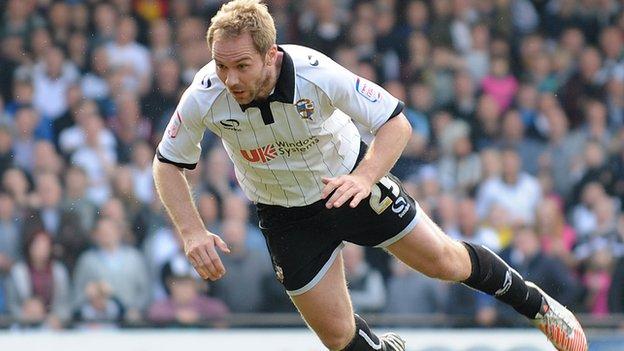 Port Vale defender Liam Chilvers hopes he has done enough to cement his place back in the team after helping to earn their first clean sheet of the season.

Saturday's shut-out in Vale's 1-0 win at Carlisle ultimately proved a step too far for Cumbrians boss Greg Abbott, who lost his job on Monday morning.

But, for Vale, it was a step forward as they adjust to life back in League One.

"You get confidence from keeping clean sheets and we can build on that," Chilvers told BBC Stoke.

It was Vale's first clean sheet in 15 matches since winning 2-0 at York on 16 March, on their way to last season's promotion from League Two.

And, having been well beaten by Wolves at home the previous weekend, it followed on the back of a morale-boosting Johnstone's Paint Trophy win over Bury for Micky Adams' men in midweek.

Chilvers was recalled for that one, having previously only played in one of Vale's first five games this season.

"Tuesday was a step in the right direction and the gaffer decided to keep the same team," added Chilvers. "And it was another step forward keeping a clean sheet.

"Carlisle are down the bottom and have had a hard start to the season and it was always going to be a bit of a scrap.

"But you go out there with the mindset that you're not going to concede.

"You have to do all the things that, as a footballer, you probably shouldn't do, just in terms of clearing it, rather than thinking about passing it."

Having got their season back on course with two straight wins, and that first clean sheet, Vale now face two tough tests.

This Saturday's trip to League One leaders Leyton Orient is followed by a visit from Adams' old side, free-scoring Coventry City, a week later.

And, having temporarily lost his place for three games, now he has got back in, 31-year-old Chilvers hopes that Adams will be reluctant to tinker with a winning team.

"It's easier trying to keep clean sheets if you've got a settled team," added Chilvers.

"The better teams you play against the more you need that understanding.

"I'd obviously like to be involved in the game on Saturday, but that's completely down to the gaffer."