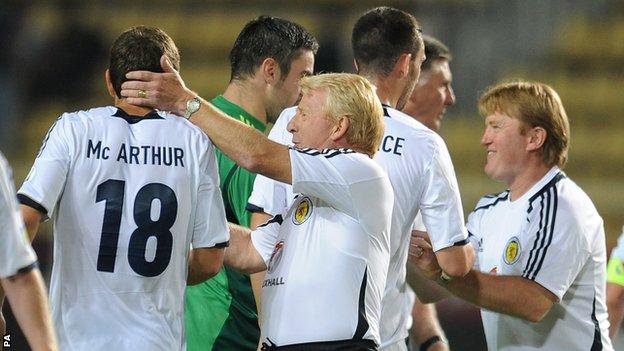 Gordon Strachan hailed his Scotland side as "terrific" following their World Cup qualifying victory in Macedonia.

Shaun Maloney's late free-kick lifted the Scots off the foot of Group A after Jovan Kostovski cancelled out Ikechi Anya's opener.

"To walk into the dressing room and see them all celebrating is what makes management worthwhile," said Strachan.

The three points take Scotland above their opponents at the Philip II Arena and Wales, who lost 3-0 at home to Serbia.

"For the players, to put that work in and be hit by a late equaliser and then come back again and score: they deserved it," said Strachan.

The Scotland boss said a draw would have been hard to take after his players put so much into the game.

"I thought they were terrific. You were trying to imagine, on this surface, how you were going to win a game of football on it. And you think: 'a sticky 1-0 would be great'. But to play like that was beyond what I'd dreamed of.

"Anya was really good, I thought he was terrific. He gave us that wee extra turn of pace and was a threat. I thought Steven Naismith up front was terrific and we didn't have a failure.

"The first half we were exceptional and the second half we were good. You expect Macedonia to come back. You expect their manager say things at half-time and they did that, they made it very difficult.

"But we still tried to play at all times.

"It's great when you do that coming back with a performance and a victory. Great football and no failures, the fans have enjoyed themselves and we'll leave it at that. We can analyse it later."