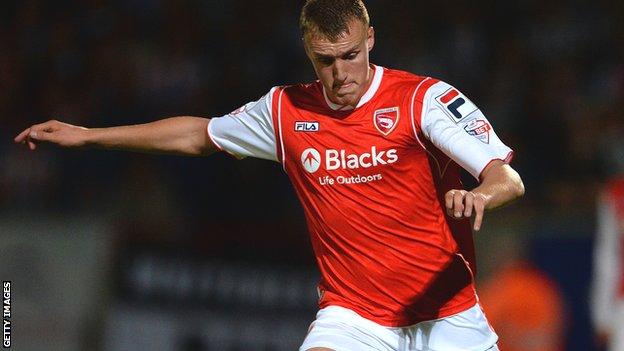 Morecambe striker Jack Sampson was deserving of his first senior goal after an impressive start to the season, says manager Jim Bentley.

The 20-year-old netted in the on Saturday - Morecambe's third successive victory in League Two.

"Any fan who's been to the games will agree that he's not had much luck," Bentley told BBC Radio Lancashire.

"The way he came inside and let it go with his left foot was fantastic. I'm pleased. It's great he's off the mark."

Sampson, who had a loan spell at Southend in 2012, and took eight appearances to register his first goal for the club.

Bentley, whose side have to move up to seventh in the table, continued: "We got Padraig Amond off the mark last week, Kevin Ellison is up to three goals now, Ryan Williams has scored and Andy Fleming has chipped in with his two great finishes.

"It's good that goals are coming from all over and long may it continue."