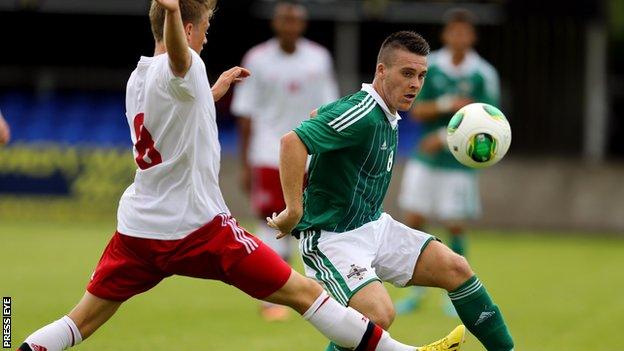 Northern Ireland suffered a second straight defeat in their 2015 European Championship qualifying campaign with a 1-0 loss away to Belgium on Monday.

Michy Batshuayi scored the only goal of the game for the Group Nine leaders after 44 minutes in Louvain.

Stephen Robinson's side also lost their opening fixture 3-0 to Cyprus in May.

Despite fielding a very young side, Northern Ireland were unlucky not to take a share of the points in Belgium after having more shots on target, five compared to Belgium's three.

Josh Carson and Carl Wincester had efforts on goal but the away side could not find the back of the net.

Donnelly picked up his second yellow card for a foul on Igor Vetokele in the 93rd minute, having picked up his first booking after 85 minutes.