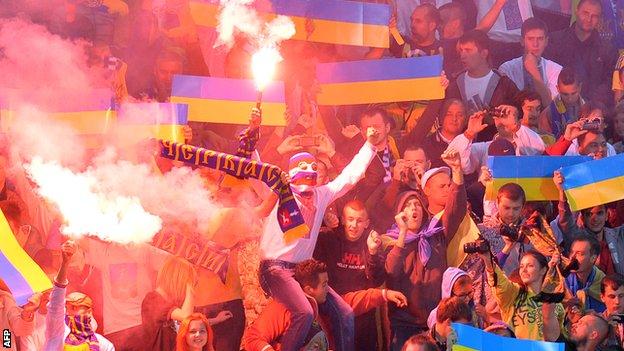 Deadpan hardly does justice to the stone-faced delivery of Ukraine coach Mikhail Fomenko, but this man of few words did not need many to express his nation's feelings about the World Cup qualifier with England.

Fomenko cuts a sharp contrast to the spontaneous combustion that lurked permanently near the surface of Oleg Blokhin, his legendary predecessor.

Former Soviet Union striker Blokhin concluded a frank discussion with a Ukrainian journalist following their defeat by England in Euro 2012 with an old-fashioned invitation to go outside for "a man talk", complete with what looked suspiciously like a few tasty shadow-boxing moves just to emphasise his point.

It is hard to imagine such differing personalities as the emotional Blokhin and the taciturn - to put it very generously - Fomenko.

And yet the latter is clearly inspirational enough to have manoeuvred Ukraine into a position in Group H where they will be firm favourites for automatic qualification should they beat England on Tuesday.

Fomenko does not go in for such obvious dramatic gestures as Blokhin.

Indeed it seems he does not go in for gestures at all but one typically short answer brought a smattering of patriotic applause from his audience in the room deep inside the vast bowl of Kiev's Olympic Stadium.

Asked if the potentially decisive meeting with England was the game of his life, he simply replied: "Not only of mine."

This was all it took to prompt the response and shine a light on the feelings of Ukraine as they believe the goal of Brazil next summer will come into sharp relief should they beat Roy Hodgson's men.

There was a mood of anticipation among Ukraine fans who walked along the banks of the vast Dnieper river that sweeps through this sprawling, exciting city.

And it will be mirrored in the mood of 70,000 supporters who will gather for what will be arguably the most important night of Hodgson's reign so far.

England are braced for the early whirlwind of attacks that have become Ukraine's calling card. Comparisons are being drawn with the occasion in October 1997 when Glenn Hoddle's England went to Rome's Stadio Olimpico and fought a rearguard action that brought back the goalless draw that sent them to France 98.

Hodgson, then coach of Inter Milan, worked as a television analyst that night.

He knows he will be under far more pressure on Tuesday as England reach the crucial point in their World Cup qualifying campaign.

The England manager admits he is feeling that pressure - and why not? Hodgson's years of experience will inform him of the stakes, both professionally and personally, that may ride on events.

Hodgson seemed at ease with such weight of expectation as he said: "We're getting closer to the situation where we are either going to achieve our goal and qualify for the World Cup or we are going to fail in our goal.

"Of course that's pressure but, like Steve Gerrard said, that is part and parcel of the business. You can't get away from that, and discussing it and admitting to it even - what does that do?

"What would you like me to say? 'No I don't feel any pressure and I couldn't care less?' Of course you wouldn't expect me to say that.

It was all said perfectly calmly but with the air of a man who could probably reel off a list of the searching questions he would be asked should he leave Kiev in the small hours of Wednesday morning a loser.

Hodgson has had a turbulent build-up with new Football Association chairman Greg Dyke realistically suggesting England would not be among the favourites to win in Brazil should they even get there.

And another unwanted distraction came in the form of defender Kyle Walker's apology for his "poor judgement" after photographs were published of the Tottenham defender inhaling nitrous oxide, commonly known as "laughing gas", during a night out in Sheffield this summer.

Take a look back at Frank Lampard's long career with West Ham, Chelsea and England

At least Hodgson's team selection was uncomplicated, with the reliable James Milner the only expected change in place of suspended Danny Welbeck.

It is an England team with a lop-sided look in terms of experience. Frank Lampard will win his 100th cap to join a select band of eight that includes team-mates Steven Gerrard and Ashley Cole.

At the other end of the scale, Rickie Lambert's story gets another chapter as he earns only his third cap at the age of 31.

With midfielder Jack Wilshere also short of competitive England experience, Hodgson will rely heavily on his vastly and trusted trio.

Mikhail Fomenko has outlined what this night means to Ukraine - but Hodgson and England will also know what it will mean to spoil it.