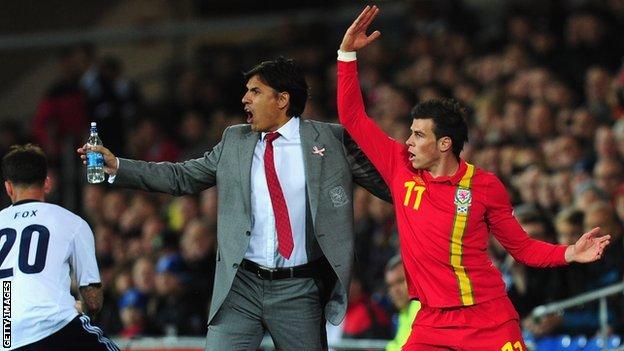 Wales manager Chris Coleman has defended his handling of Gareth Bale during the 2014 World Cup qualifiers.

Coleman was criticised for not fielding Real Madrid's world record signing in Wales' 2-1 defeat in Macedonia.

Although Bale trained with the squad on Monday, in Cardiff on Tuesday.

"For us you've got to look at it and say he is a potential risk to pull a hamstring or even worse because physically he's not ready to play 90 minutes."

What manager in their right frame of mind would say 'Gareth Bale's fit, but I'm not going to put him on the pitch'?

Bale trained with the rest of the Wales squad on Monday after having a scan on a groin injury.

Coleman says that despite the "disappointing" defeat by Macedonia in Skopje his side can still finish third in Group A.

The Wales manager said Bale was never in serious contention to face Macedonia and that he put the player on the bench in Skopje to ensure the hosts were not boosted by his absence.

Coleman described the 24-year-old as "the world's most expensive player on a bench".

And Coleman, who arrived in Skopje late because of a passport problem, denied "hoodwinking" travelling fans.

He said: "I don't mind taking a bit of flak for I didn't get on the same flight as the lads.

"But someone said 'do you feel like you've hoodwinked the supporters'?

"Slow down a bit there. That's a strong accusation.

"I'd never hoodwink any supporters, certainly not our Welsh supporters who pay a lot of money to travel around the world to watch us play.

"I maybe look back at what I said in my press conferences - and my assistant Kit Symons - 'if there's a chance he can be fit, sure he'll play a part', not 'he's going to play'.

"What manager in their right frame of mind would say 'he's fit, but I'm not going to put him on the pitch'?

"Why wouldn't you put him on the pitch and we're 2-1 down and you've got a player who can turn a game like that, can win you a game?

"It's ridiculous. There's no reason to hold him back. We need him on the pitch, but the rules are the same for him as for everybody.

Coleman says the public and media interest in Bale since his move to the Bernabeu is "new" for him and his staff.

And he denied being under commercial pressure to include an unfit Bale in his squad.

"Everybody wants to know when, why, what, how, who so there's no stone left unturned and I just think it's a learning curve for us.

"It's a learning curve for me to see how all this has been handled."