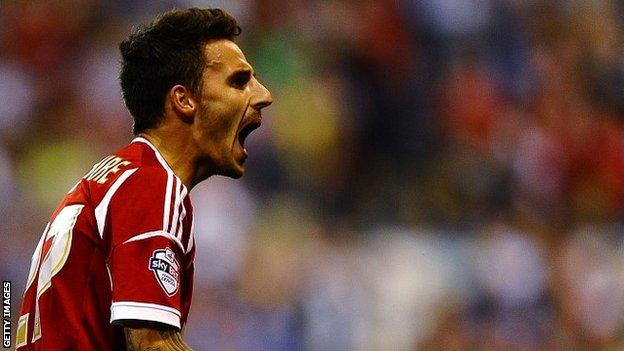 Substitutes Matt Derbyshire and Darius Henderson scored to give Nottingham Forest a draw with Middlesbrough.

Henderson headed in to cap the comeback before Boro's Emanuel Ledesma was sent off for a foul on Henri Lansbury.

Nottingham Forest have lost once in nine games this season

The result kept Forest within two points of the top of the Championship, but Billy Davies's side could have been fighting for three points rather than one late on had they made more of their early dominance.

The hosts saw a penalty appeal for a possible handball by Jonathan Woodgate turned down, before Kamara, who spent last season on loan at Norwich, left them trailing.

The referee did point to the spot when Radoslaw Majewski was upended by Rhys Williams, but Reid was brilliantly denied from 12 yards by a stretching Steele.

Another superb stop from Steele prevented Jamie Mackie giving Forest parity early in the second half as he got down low to keep out the former QPR forward's header.

Friend's superb effort forced Davies into a double swap that eventually paid off with Derbyshire heading in and Henderson equalising in the 80th minute after Lansbury's deflected effort had caused chaos in the box.

While Forest's substitutes made a positive impact for their side, Ledesma, who came on for Boro, lasted about 15 minutes before earning a straight red for a challenge from behind on Lansbury.

"The one thing we can say about this group of players is that they never give in, they have a fantastic energy and spirit about them and that's what makes me proud.

"We thoroughly deserved to win the match and on another night we would have taken three points."

"They never really felt threatened. Yes, they put a lot of balls in the box but Jonathan Woodgate and Rhys Williams headed a lot of balls out and stood out well, while we looked a threat on the break, highlighted by both of our goals.

"They nullified our passing game, but we stood up to the test pretty well."