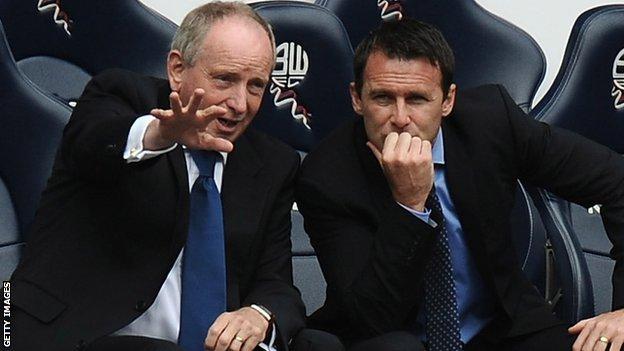 Bolton slipped to the bottom of the Championship despite ending a run of four defeats with a draw against Derby.

Wanderers, who are yet to win this season, went in front as Alex Baptiste scored from the edge of the box.

Striker Johnny Russell equalised by tapping home from close range, before giving the visitors the lead 11 minutes later with another simple finish.

Bolton midfielder Chris Eagles completed the scoring before the break with a 25-yard drive.

Bolton have made their worst start to a league season in 50 years. They are one of just two sides in the division without a win - the other being Sheffield Wednesday

The home side dominated for large spells of the second half, with substitute David Ngog wasting their best chance when he put a free header wide.

Dougie Freedman's Trotters were among the pre-season favourites for promotion, but Millwall's shock 3-1 win over Blackpool means now they sit bottom of the table with just three points from their opening seven games.

Derby slip to eighth but are just five points behind league leaders Leicester.

"This is the first time in my management career at Bolton that I'm going to say I am frustrated. There's a lot of suggestion there that we've got a good team, we just need to gel them together a little bit and stop losing goals at crucial moments in football matches.

"It's certainly a spirited performance but it's a game we should win. There was loads of plusses, it's just you score a couple of goals and where you are right now you think that's going to be enough for you but it doesn't quite work that way.

"We are trying very hard; we're in training double sessions, we're working with the players we've got and we're trying our very best to put it right."

"I'm delighted with the performance and the manner in which we went about the game.

"It was a setback going one-nil down early on, I thought it gave Bolton a huge lift but the way we came back and the way in which we played was especially pleasing. We conceded our second goal when we were at our most comfortable in the game.

"Lee Grant came in, put his hand up at half-time and said he should have done better with it. And that's what's probably cost us the three points instead of the single one."