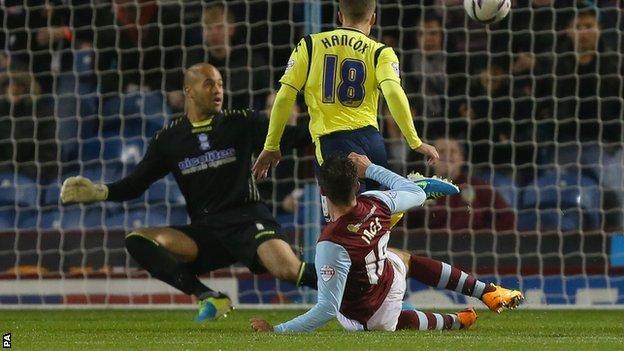 Striker Danny Ings scored twice for Burnley in a comfortable victory over Birmingham in the Championship.

The 21-year-old opened the scoring inside the first three minutes with a cool finish into the corner of the net.

Kyle Bartley could have equalised on the stroke of half-time but headed wide, and was made to pay as Scott Arfield struck soon after the interval.

Ings netted his second on 54 minutes to maintain the Clarets' unbeaten home record in the league this season.

Lee Clark's visitors went into the match unbeaten in five games against Burnley, but were on the receiving end of some clinical finishing.

And they have now picked up just one point from their last available 15 to slip into the bottom four.

Ings broke the deadlock with his first chance of the game, keeping his composure to lift a shot home after being played in by strike partner Sam Vokes.

It could easily have been two soon after as the Birmingham defence gave Ings too much space, but he side-footed his shot wide.

The visitors could have restored parity but Lee Novak was unable to get on the end of Chris Burke's ball in, before Bartley's header flew wide.

"There was a small percentage of doom-mongers here who, as soon as Charlie Austin went [to QPR], they were the 'that's-it brigade' - very small, I must say.

"It's going well for them [the players], well for us, well for the fans, but it's a constant work in progress, we're still light in squad numbers and we have to be aware of that."

"Frustration's a feeling you have when you think you deserve to get something from a game. Probably the word [I would use] is disappointing because we got what we deserved.

"We didn't play well enough in every aspect of the game. When you lose goals so quickly in each half it becomes a problem.

"It's by far and away our most disappointing performance of the season. I take the full responsibility, I'm the leader of the group and I take responsibility for it. We go and push ourselves forward, dust ourselves down and get ready for Saturday."