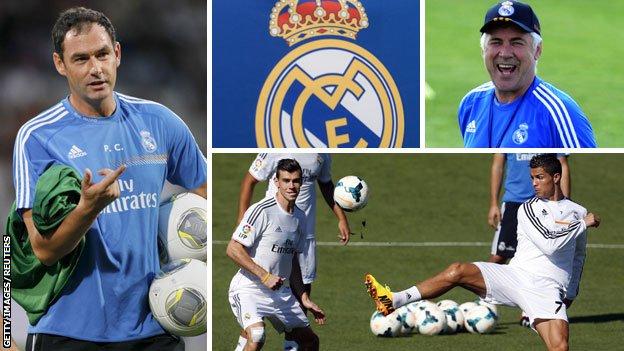 It takes a lot to fluster Paul Clement.

In only three years, the relative novice English coach had worked at two of the most famous clubs in Europe and trained the world's greatest players. His CV was impressive, and his stature was growing - life was perfect. But then he received news this year that even he found hard to comprehend.

"My knees started to shake at the possibility that I could work at Real Madrid," the 41-year-old told BBC Sport.

That golden carrot was dangled in front of him by his mentor Carlo Ancelotti, under whom he was working at Paris St-Germain and alongside whom he had worked at Chelsea. The experienced Italian accepted Real's approach, signed on the dotted line in the summer and asked Clement to join him.

"When I came with Carlo that first day I felt the magnitude of the club," continued Clement. "The support for Madrid in the country and worldwide. They have incredible infrastructure. Then there are the sponsors involved with the club.

"It feels bigger than a club, it's an institution."

Clement, who worked as a PE teacher in Sutton from 1995 to 2000, is from a football family. His father is the former QPR and England full-back Dave, who took his own life at the age of 34, and his brother is the ex-Chelsea and West Bromwich Albion defender Neil.

Paul never played the game professionally, though. While working as a teacher he studied for his coaching badges and helped with Chelsea's Football in the Community programme.

After obtaining his Uefa 'A' licence, he managed to secure his first full-time football role, at Fulham, before returning to Chelsea in 2007.

He steadily rose up the ranks before being picked out by interim manager Guus Hiddink to become a member of his backroom staff.

"[Hiddink] really knew how to capture an audience and was a great motivator and influencer of people," says Clement.

However, it was was when Ancelotti replaced the Dutchman at Stamford Bridge in June 2009 that his career took off. The Italian, who won the Serie A and two Champions League crowns at AC Milan, made Clement one of his assistants, and in their first season together they secured the Premier League and FA Cup double.

Clement has huge admiration for his Italian boss.

"He treats the players like men," he explains. "He expects respect in both directions. He also loves to coach on the field - he's very active day to day.

"Carlo carries out the practices and does the work. He's very good in the classroom - with a flip chart, on the tactics board and with the video.

"He's really good to work for - over time he's given me more and more responsibility."

The duo went their separate ways when Ancelotti was sacked by Chelsea in 2011. Clement teamed up with Steve Kean at Blackburn, while the Italian joined Paris St-Germain.

However, in January 2012 they were reunited when Ancelotti asked his trusted assistant to join him at the big-spending Ligue 1 side.

One player that really stood out for me was Deco when I was at Chelsea. When he was fit and playing at the top of ability he was one of the best players

More success came their way with the French championship and a good run in the Champions League. Then Los Blancos came calling.

Real finished a distant second to Barcelona last season and bowed out at the semi-final stage of the Champions League for the third year running. It's been 11 years since they were last kings of Europe.

The Londoner is adamant that Real have found their saviour.

"The list of top players at Real Madrid is endless," adds Clement. "These stars are under an incredible amount of pressure - especially at this club - and what Carlo does well is understand the pressure they are under.

"His calm temperament is a help to that, especially during the week in training - the way he manages them individually."

Clement's career has been very closely aligned to that of Ancelotti so far, but would he ever consider going it alone?

Winger Stephen Hunt said this week that the Englishman should be considered as the next Republic of Ireland manager, following the departure of Giovanni Trapattoni.

Clement has said that he hopes there was "a chairman out there who will look at me and think 'he's had a good apprenticeship'".

Until then he is content to continue learning his trade from one of football's all-time great managers at one of its finest schools.