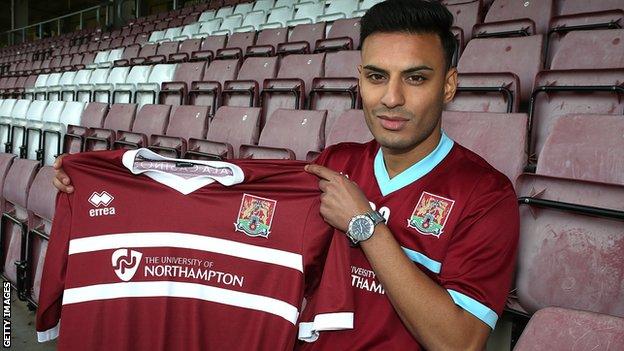 The 27-year-old London-born defender had a trial with the Cobblers last season and has recently recovered from a hip injury.

He was in the Arsenal academy, before playing college football in the USA, and has four international caps.

We've given Kashif a chance to train with the first team. We will monitor his progress

Meanwhile, striker Jacob Blyth has extended his loan from Leicester City until 2 November.

The 21-year-old has scored two goals in four starts for the Cobblers so far.

"He's honest, he wants to run around and he's brave. We've got to start providing him, Clive Platt and Roy O'Donovan with the ammunition to score some goals."

Siddiqi, who is yet to make a Football League appearance, has become renowned for his community work, notably for trying to increase participation in football among young Asians.

He is currently shortlisted for the Inspiration Award at the Asian Football Awards, to be held in October.

"We've given him a chance to train with the first team and he is very keen and he's very enthusiastic so we will monitor his progress and see how he goes," said Boothroyd.