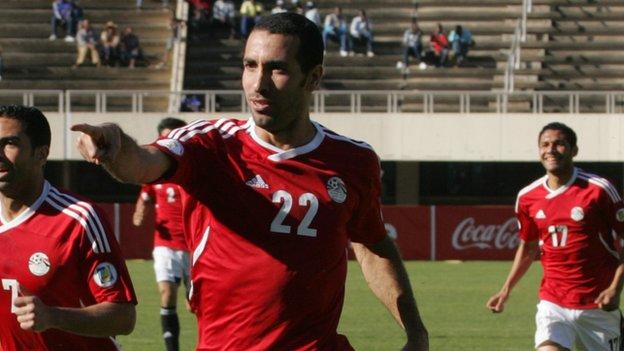 Mohamed Aboutrika scored on his 100th appearance for Egypt to help his side beat Guinea 4-2 and complete the group stage of World Cup qualification with a 100% record.

Egypt had already won Group G and reached the final African play-off round for next year's tournament in Brazil and went into the match looking for a sixth win in as many games.

But Guinea, the second-placed side in the group, went ahead only four minutes when Adam El-Abd scored an own goal.

And it took the hosts a while to recover, Hossam Ghaly equalising in the 38th minute.

Four minutes after the break, Kamil Zayatte was sent off and Egypt took advantage only two minutes later when Aboutrika celebrated his landmark achievement with a strike that put Egypt ahead for the first time in the match.

Guinea refused to buckle and hit back through Seydouba Soumah but their 10 men finally succumbed in the last few mnutes as Egypt turned up the pressure.

Mohamed Salah made it 3-2 on 83 minutes and the scoring was rounded off four minutes later when Guinea's Mohamed Sakho put through his own net.

The result gave Egypt the honour of being the only side on the continent to finish group qualification with a maximum haul of 18 points.