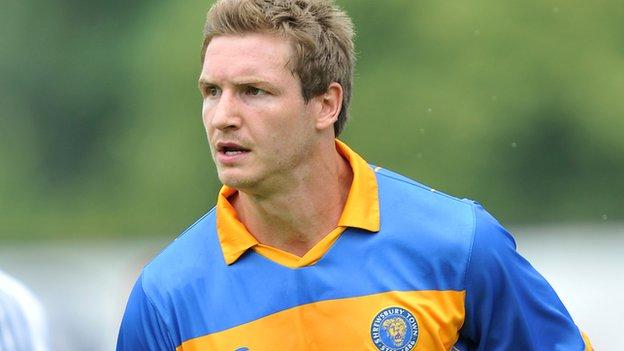 Shrewsbury Town's Dave Winfield is at last getting close to making his debut, three months after his pre-season arrival from Wycombe Wanderers.

The 25-year-old defender was forced to miss the first month of the new season after suffering a bad hamstring injury.

He played the first half hour of a reserve game against Oldham on Tuesday, and will be on the substitutes' bench at Crawley on Saturday.

"It will be good to have him back," said manager Graham Turner.

"It was a bad hamstring injury the Tuesday before the season was due to start, the timing of it and the severity of it, and he's had to suffer now for six weeks."

Turner is also hoping he will soon be able to call on captain Tamika Mkandawire, who is also on the mend after a less serious hamstring strain.

"He's going to miss the next couple at least," he told BBC Radio Shropshire. "Probably Crawley and Bristol City next Tuesday night, then he may be a prospect for the Wolves game [on 21 September]."

Turner, whose team have lost just once in their first five league matches, is also concerned that young strikers Tom Bradshaw and Graham Burke report back fit and well from international duty.

Aston Villa loan man Burke played the final eight minutes in Sligo for the Republic of Ireland Under-21s on Monday night as they lost 4-0 to Germany.

And Bradshaw made a substitute appearances for Wales Under-21s late on in their 0-0 draw against Moldova, having also appeared in last Friday night's 1-0 defeat in San Marino.

"I just hope he's not scarred mentally by that defeat," joked Turner. "With all due respect to San Marino, Wales Under-21s should not be losing to them."