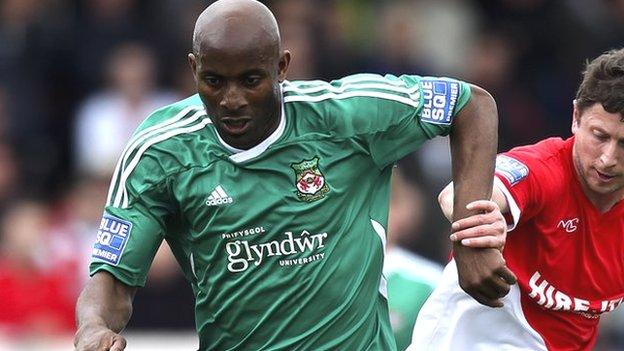 You know you've made it as a professional footballer when the fans of the team you're playing for make up a song in your honour.

It created the fearsome reputation that eventually persuaded Trevor Francis to pay £1m to bring him to Birmingham City, then still a second tier outfit, in 1998.

In the 15 years since, given all his early promise at Crewe, a record of 136 Football League goals from 440 starts might seem on the disappointing side.

But, in a much-travelled career spent largely with Crewe, Birmingham and Coventry City - as well as one good season at Bristol City - Adebola was more than just a scorer.

The 6ft 2in Scouser was a big target man with a surprisingly decent touch who, apart from his obvious aerial ability, went in more for spectacular strikes - and Birmingham fans will never forget his match-winning brace to win a League Cup tie against Tottenham at White Hart Lane in November 2000.

Often pictured with a smile on his face, his obvious love for the game remains now he has packed in as a full-time professional player to spend his Saturday afternoons, at the age of 38, turning out on a match-by-match basis for Rushall Olympic in the Evo-Stik Premier Division, the seventh tier of English football.

After 20 years as a pro, it looked as if his career would end in disappointment when, having been loaned out by Rochdale, his hopes of helping Wrexham back to the Football League were dashed.

After being left on the bench, he was finally given his chance two minutes from time, straight after Newport County had scored the opening goal.

But Wrexham immediately conceded another one to lose 2-0 and Adebola is the first to admit that he thought that was that.

"I was going to stop playing," he told BBC WM. "I've been taking my coaching badges and doing work on the development side back at Blues - but I still wanted to enjoy playing football, so it was either this or playing park football on Sundays.

"I've done no pre-season. I was straight into playing but you get your fitness doing that. I'm playing Saturday, Tuesday, Saturday and I'm enjoying it which, at the back end of last season, I wasn't."

How long it lasts may be a simple case of how long it is before his legs go.

But, for the moment, having hit three goals in as many games, he is just content to be part of an otherwise young Rushall team who, on the back of Saturday's impressive 2-0 win in front of a 2,000-plus crowd against FC United of Manchester at Gigg Lane, are now within a point of the Evo-Stik Premier play-off zone.

Having been paired up front with the likes of Peter Ndlovu, Andrew Johnson, Geoff Horsfield, Dougie Freedman, Rob Earnshaw, Matty Fryatt and Lee Hughes during his professional career, he is now just as concerned with bringing the best out of his young strike partner Ahmed Obeng.

They both scored at Gigg Lane on Saturday - and Obeng has been watched by Walsall and was also on trial with Birmingham in the summer, although there is yet to be any sign of a follow-up.

However, Adebola sees something there. "This is a good starting point for Ahmed," he said. "He's got pace to burn. All I do is put him away.

"But there are a lot of good players here. They're a great set of guys and the football's been decent.

"I'm at the end of my career. I'm just looking to help out and play.

"But it's opened my eyes. A lot play good football. It's not a fitness thing, the difference is down to the decision-making and the mistakes, but it's a good overall standard."

And, given the fact that Adebola played almost 650 games for his 12 league clubs, does he think the defenders he is up against know he used to be a bit of a name?

"Judging from the number of kicks I've had already then I'd say yes," he said with a grin.