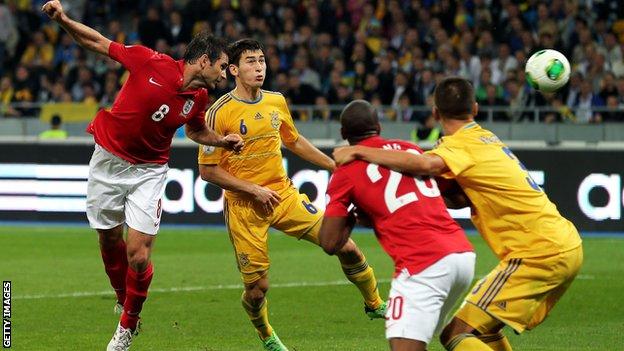 Hodgson's side stay top of Group H and will qualify for Brazil if they win their final two Wembley qualifiers against Montenegro and Poland.

After a game low on quality, and played in front of 70,000 fans, the England boss said: "Before the game, the feeling among a lot of people was that a draw would be a good result."

He added: "I'm surprised to hear what I thought was a good performance and result might be being seen as an underwhelming performance."

The Three Lions struggled to create chances in Kiev's Olympic Stadium, with Steven Gerrard firing over in the first half and fellow midfielder Frank Lampard heading wide late on.

"Our attacking options were very limited because we were without Rooney, Welbeck and Sturridge," Hodgson said.

"We also lost a top midfield player in Alex Oxlade-Chamberlain [because of a knee injury] and I thought those players who took their places did a remarkable job."

The draw moved England one point clear of Montenegro at the top of Group H with two games remaining.

"It is still very tight but the important thing is a draw maintains our place at the top of the group and makes sure that in our last two matches at home we have our fate in our own hands," Hodgson said.

"I'm more than happy that we go into those two games at Wembley at the top of our group and a point ahead of our two closest rivals. We have the chance to get those six points to make us clear automatic qualifiers."

Hodgson was delighted with the performance of England's defence, saying: "I thought Kyle Walker, Gary Cahill, Phil Jagielka and Ashley Cole were really good and they needed to be against the quality of that team."

England are still yet to beat anyone other than Moldova and San Marino in their World Cup qualifying campaign, but Gerrard insisted that, with the destiny of Group H still in their hands, England could be happy with their night's work.

"Of course we would have liked to win the game and had a little more cutting edge in the final third, but I think ever since I have been a young kid the message has been the same: if you can't win a game then make sure you don't lose it," he said.

England failed to score for the first time in 14 internationals; having scored in every game since the 0-0 draw against Italy at Euro 2012

"For the last two games we will have home advantage, it will be a packed Wembley, a great atmosphere and we will have a lot more players to pick from, so I am confident that we can go and get the job done."

Arsenal midfielder Jack Wilshere's performance was one of the disappointments of the night and he was taken off with just over 20 minutes remaining.

"Jack is still looking for full fitness and in the second half we felt we needed to take him off," Hodgson added.

"We saw a more effective Jack against Moldova but he did all his work and everything I asked of him tactically."