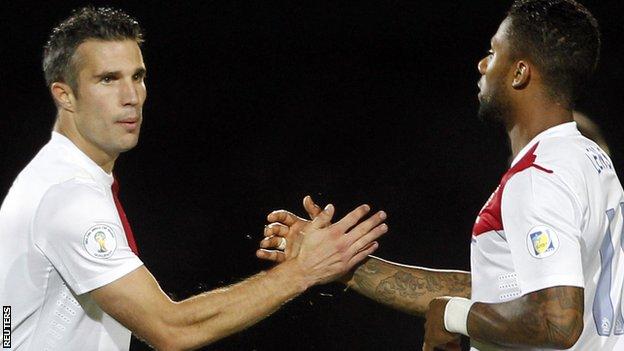 The Netherlands and Italy have become the first two European countries to qualify for the 2014 World Cup.

Robin van Persie scored twice as the Dutch beat Andorra 2-0, and Turkey's 2-0 win in Romania ensured they could not be overtaken at the top of Group D.

Belgium, Germany and Switzerland need two points to secure a place in Brazil.

Germany guaranteed at least a play-off spot with a 3-0 victory in the Faroe Islands thanks to goal from Arsenal's Per Mertesacker and Mesut Ozil and a third from Thomas Muller.

Bosnia-Hercegovina and Greece both secured at least a spot in the play-offs in Group G, while France are likely to be in the play-offs after their 4-2 win in Belarus put them level on points with Group I leaders Spain, who have a game in hand.

Elsewhere, Argentina booked their place at the tournament after a 5-2 win in Paraguay, with Lionel Messi scoring twice from the penalty spot, while Manchester City striker Sergio Aguero also got on the scoresheet for the Argentines.

Argentina top the South American group and are guaranteed one of the top four spots which secure qualification.

Neither of the top two sides - Belgium and Croatia - were in action. Serbia all but guaranteed third place with a 3-0 victory in Wales, while Scotland moved up to fourth with a 2-1 win in Macedonia.

Czech Republic coach Michal Bilek resigned after his side lost 2-1 to Italy in Turin, as the hosts qualified for next year's World Cup. Bulgaria are leading the race for the play-offs after a 2-1 win in Malta, closely followed by Denmark, who won 1-0 in Armenia.

Germany closed in on a place in Brazil with a 3-0 triumph in the Faroe Islands, but they were denied qualification when Zlatan Ibrahimovic's first-minute strike gave Sweden all three points against Kazakhstan. The Republic of Ireland are all but out after their 1-0 defeat in Austria.

The Netherlands' 2-0 victory over Andorra was their seventh win from eight games. Romania slipped from second to fourth after a 2-0 home defeat by Turkey. Hungary now occupy the play-off spot after their 5-1 victory over Estonia.

Switzerland won 2-0 in Norway but were denied qualification when Birkir Bjarnason and Kolbeinn Sigthorsson gave Iceland a 2-1 win over Albania. Slovenia are third after a 2-0 win in Cyprus.

Portugal, who were not in action, lost the lead to Russia after their 3-1 win over Israel. Luxembourg moved off the bottom with a 3-2 defeat of Northern Ireland, their first win in a World Cup qualifier for 41 years.

Bosnia fought back from a goal down to beat Slovakia 2-1 and remain top on goal difference above Greece, who beat Latvia 1-0.

After a 0-0 draw in Ukraine, England remain top, while Alessandro Della Valle scored San Marino's first goal of the World Cup qualifiers in a 5-1 defeat by Poland.

France twice fell behind against Belarus, but two goals from Franck Ribery and strikes from Samir Nasri and Paul Pogba snatched a 4-2 victory. It secured Les Bleus a play-off place but they remain second on goal difference behind Spain, who have a game in hand.