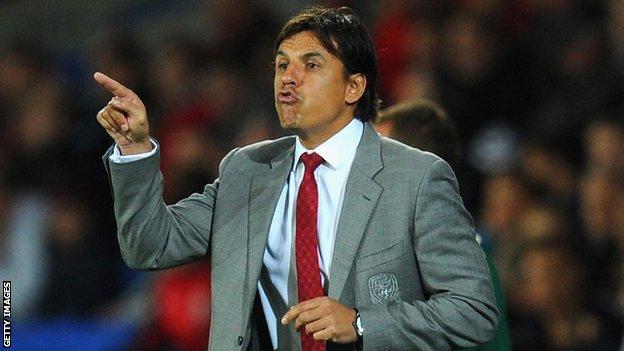 Chris Coleman says James Collins refused to join the Wales squad before the 3-0 defeat by Serbia on Tuesday.

Manager Coleman claims he invited West Ham defender Collins to join the squad after suspension and injury had ruled out Ashley Williams and Sam Ricketts.

"James explained to me that he didn't want to come into the squad after being on stand-by because psychologically he was disappointed," said Coleman.

"But that's not the attitude I'm looking for."

Chris Coleman was happy with Gareth Bale's substitute appearance against Serbia, but believes he is still some way short of full fitness ahead of his potential bow for Real this weekend.

"He [Bale] played 30 minutes but after 15 minutes he looked tired - but he has only had four training sessions, so you will not get what you normally get," Coleman said.

"But he gave us a lift, the fans were excited and it gave us a spur, although the game was done and dusted.

He added: "If he starts Saturday he will not finish the game, I would be amazed if he does.

"He is nowhere near ready for 90 minutes."

Coleman partnered Crystal Palace's Danny Gabbidon and Swansea's Ben Davies in central defence against Serbia, even though the latter had never played in that position at a professional level.

The Serbs exploited uncertainty at the heart of the Welsh defence as they took a 2-0 lead inside 35 minutes in Cardiff and the home team never recovered.

Collins was left out of Coleman's initial squad for the matches against Macedonia and Serbia, but the manager felt the 30-year-old should have been keen to get back into the side when the opportunity arose.

"I'd rather someone turns around to me and says, 'I should be in the squad, you got it wrong and I'm going to roll my sleeves up to prove you wrong'. That's what I'm looking for and I didn't get that," added Coleman.

"We just need everybody here, the best team we can get our hands on for every game - friendlies, qualifying matches, whatever they are. That's how we get better.

"After the Macedonia game, we were scratching around for players because of injuries and suspensions and I'm calling up players who have not been in the squad and they don't come.

"It has to mean everything to turn up to play for Wales. If it doesn't, then don't turn up."