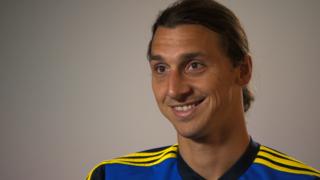 Mourinho made me a lion - Ibrahimovic

Sweden striker Zlatan Ibrahimovic says playing under Jose Mourinho at Inter Milan made him "feel like a lion".

The 31-year old striker says the Portuguese boss "dragged things out of me that no other coach has done before", as the two combined to win the Italian league.

The Paris St-Germain star thinks "nobody is worth" the 100m Euros (£85.3m) that Real Madrid paid for Gareth Bale and advises the Welshman that he will need to show "patience" to succeed in the Spanish capital.

Listen to the full interview with Ibrahimovic in an hour-long programme on 5 live from 2030 BST on Wednesday.

You can also watch more from the interview on Football Focus at 12:15 BST, Saturday 14 September on BBC One.