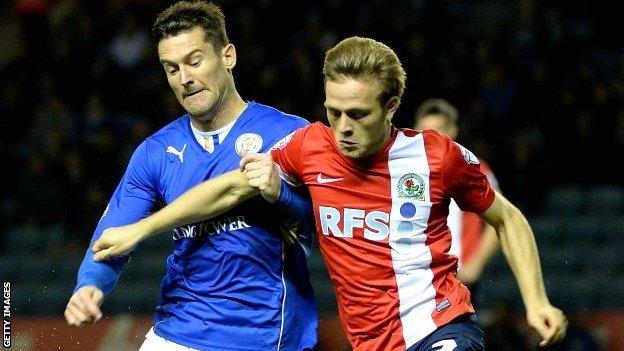 Leicester made it five wins from seven games to go top of the Championship with victory over Blackburn.

City, who started the day in fourth, went ahead through Lloyd Dyer's 16th-minute close-range effort and doubled their lead with David Nugent's penalty on the stroke of half-time.

Blackburn pulled one back through Jordan Rhodes's 70th-minute spot-kick.

But the hosts held on to climb to the summit, while Rovers lost for the third time this season.

The hosts went into the game buoyed by the signing of Poland defender Marcin Wasilewski, previously a free agent after leaving Belgian champions Anderlecht.

The 33-year-old was not available for this match and his new team-mates were rarely troubled before they went ahead when the influential Andy King threaded the ball through to Dyer, who prodded across Jake Kean from just to the left of goal.

Leicester continued to dominate and captain Wes Morgan had a goalbound header following a corner blocked by Kean.

The Foxes did score a second, though, after Jason Lowe conceded possession in midfield and Tommy Spurr compounded that by fouling Ritchie de Laet in the penalty area.

Jamie Vardy spurned a golden chance to make it three early in the second period when Anthony Knockaert put him through one-on-one with Kean, who saved.

Blackburn, yet to win away from home, pulled one back when Spurr played in substitute Chris Taylor, who was brought down by Danny Drinkwater.

Rhodes coolly slid the penalty into the left corner, sending Kasper Schmeichel the wrong way, but it was Leicester who finished in the ascendancy.

QPR, who along with Blackpool are level on points with the Foxes, can go top when they play their game in hand against Brighton on Wednesday.

"I think if we'd won the game four or five-nil, I don't think anybody could have complained. But just to slightly redress that perspective, it's an illustration of how fine the lines are in this division and football in general.

"It's a tight game in the end scoreline-wise and I've seen games like that end up in draws or even narrow defeats. It's finding a way of getting over the line.

"Clearly scoring when you're on top is important, but I don't think anyone could argue that we weren't worth the three points tonight."

"I thought we didn't defend very well for the first goal.

"Then we were just preparing to go in at half-time and just started to come into the game and got into one or two good areas against a very strong and experienced Championship side, and then the linesman gives a decision that changes the course of the game.

"I think you always judge it by the reaction of both sets of players. I think you could see what our lads thought of the penalty. And I think if you look on the video again, there's only one Leicester player that really appeals and even then it's half-hearted."