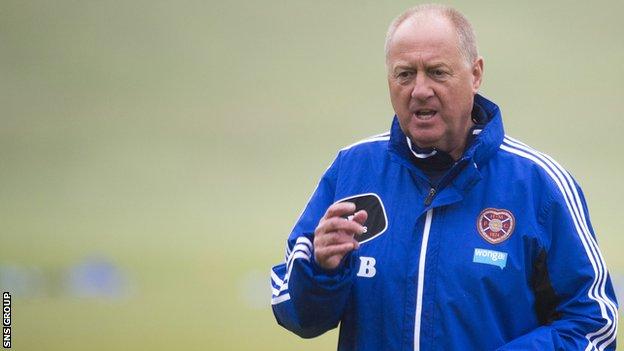 Assistant manager Billy Brown has been given a short-term contract at Hearts after the experienced coach returned to the club on a voluntary basis.

The 62-year-old, in his third spell at Tynecastle, has signed a deal until the end of January.

Brown left the manager's post at East Fife at the end of last season.

And he rejoined Hearts on 1 July, weeks after the club went into administration and were hit with a 15-point penalty, agreeing to work without pay.

Manager Gary Locke played under Brown and Jim Jefferies at Hearts, Bradford and Kilmarnock and is delighted that one of his mentors is staying on to help him.

"I am over the moon," Locke told the Hearts website. "I have the utmost respect and admiration for Billy and to have him as a shoulder to lean on is a huge help.

"He knows everything there is to know about the Scottish game and to have someone of his enormous experience here is a boost."

Brown, who also had a brief spell coaching at Edinburgh rivals Hibernian, is looking forward to the challenge of keeping Hearts in the Scottish Premiership, with the club currently nine points adrift of St Mirren.

"I didn't enjoy being out of the game and came here with the intentions of helping Gary and the club as much as I could," he said.

"I have a lot of enthusiasm for the club and the job and I'm very excited about what's happening here at the moment.

"We have the whole season to keep chipping away at the teams above us. The young players have done exceptionally well so far and they will only get better - but it is not going to be an easy task."