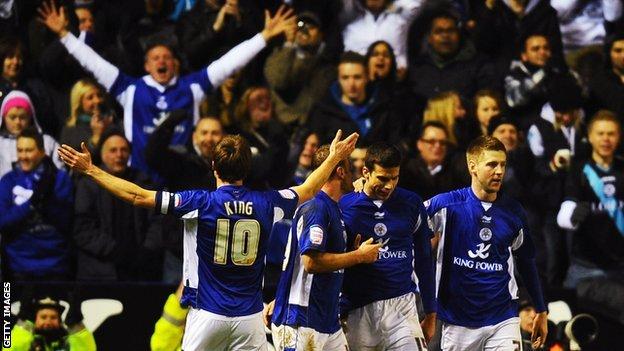 Leicester City are making a unique offer to their fans that could see them receive partial refunds on season tickets should matches be moved for live television broadcast.

If six or more home league games are affected, season-ticket holders at the King Power Stadium can claim a refund equal to the pro-rata value of one fixture.

A Leicester spokesman told BBC Sport: "During the 2012-13 season, eight of our 23 home league matches were rescheduled to accommodate live television coverage - an unprecedented number for a club in the Championship.

We value all our supporters, but the foundations of this community club are built upon family ties

"During a thorough consultation period with our supporters, this proved a considerable source of frustration for our season-ticket holders. Many had been unable to maximise the value of their season tickets when such a large number of games had been rescheduled.

"In response, we have sought to protect the value offered to our most loyal supporters."

BBC Sport Price of Football found the Foxes are also among a number of Championship clubs to offer a wide range of incentives for both adult and junior supporters.

Burnley have introduced flexi-tickets, offering fans the choice of which games they attend for a fixed price, while Lancashire rivals Blackburn offer free tickets to under-eights and £60 season tickets for under-15s.

A Clarets spokesman told BBC Sport: "The next generation of Burnley fans is hugely important to the club. We value all our supporters, but the foundations of this community club are built upon family ties. The club has experienced both ends of the footballing spectrum, but the Premier League season [2009-10] reignited interest and our task as custodians is to harness that support.

"Next season, we can no longer rely on the Premier League parachute payments and our supporters are the very lifeblood of the club, so we are always looking to provide the best possible deal to supporters, while being mindful of the cost of running the club."

Junior supporters' clubs are a key component of the Championship, with many clubs putting extra resources into building the foundations of a new generation of fans.

Blackpool's junior supporters' club entitles a child under eight to attend matches with a paying adult for free if they are a member, while Sheffield Wednesday's Junior Owls offer the same deal.

Leeds United have launched a members' FamilyZone, where the club will host a range of family entertainment prior to each home match.

Huddersfield offer a birthday incentive called Terrier 7s where schools and individuals can register local children turning seven, who are then invited to a game near their birthday. For £15, the child receives one adult and one junior ticket, meets some of the team ahead of kick-off and is presented with a replica home or away shirt and photograph.

Doncaster's In Rovers We Trust initiative sees the club working in partnership with supporters to gain regular feedback about their match-day package. Free season tickets for under-eights and mini season tickets for children priced from £20-£50 are among their offerings.

The club's communications manager Shaun Lockwood told BBC Sport: "Our family approach is very important to us and we're committed to improving our service levels to families. Doncaster Rovers are one of only eight clubs across the Football League who have won the Family Excellence Award each year since it was created.

"Every quarter we conduct a major survey amongst our fanbase asking them to rate their experience supporting us, how valued we have made them feel and whether they would recommend us to friends."

Birmingham City offer free season tickets to under-10s anywhere in St Andrew's with a full paying adult, while Charlton offer discounted adult tickets in their family stand when purchasing tickets for a junior.

Following Derby's success with dynamic pricing, the club has now introduced a new family area at Pride Park, with tickets available from just £3.50 - or free to junior members of the club.

Millwall insist "building the next generation of supporters is and will continue to be the focus for the football club" and have launched a junior membership scheme and opened a new family stand.

Relegated sides QPR and Reading offer under-eights free entry in silver and bronze areas of Loftus Road, while the Royals offer under-16s a chance to buy season tickets that work out at £5.43 per game.

Watford offer season tickets in their family stand for £30 for 8-15 year-olds and £10 to under-sevens, when bought with a full paying adult.