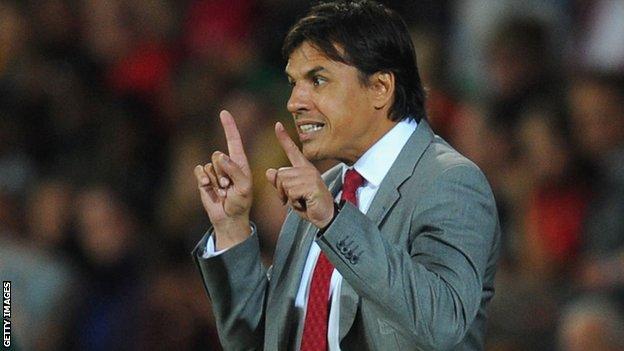 Wales slipped to bottom of their World Cup qualifying group after their 3-0 defeat against Serbia in Cardiff.

Under-fire Coleman has been offered a new deal, but has not yet signed on the dotted line, and Hughes believes he should continue in the role.

"I don't see why not, he hasn't had a chance to really prove himself," he said.

"Personally I say yes, give him the opportunity."

However, Hughes pointed out that Coleman's appointment would have to be ratified by the full council of the FAW, which doesn't meet until after the final qualifying match against Belgium on 15 October.

Former Fulham and Real Sociedad boss Coleman has seen his team win just three of his 12 games in charge.

The home defeat against Serbia followed a 2-1 loss in Macedonia while Scotland's win in the former Yugoslav republic on Tuesday saw them overtake Wales in the Group A table.

Coleman himself insists he is determined to continue despite public criticism of his team's performance.

"Talking about the contract, that's been agreed but I've not signed it," he said.

"I've never backed away from a challenge either as a player or as a manager and I wouldn't want to walk away from this group of players I believe they're a good set.

"And I think having a good run at it we'll be a lot better next time than this time that's for sure. I haven't got any plans of doing anything else."

Coleman added he had no complaints about the fans booing at the end of the match in Cardiff on Tuesday.

"I don't blame the fans for reacting like that, I really don't," he said.

"I think they've been behind us through this campaign especially we've performed well against Scotland."

However, Reading defender Chris Gunter said he would be disappointed if a Welsh crowd called for the manager to be sacked.

"The Gaffer's been brilliant for us and if there was any shouts like that then it's silly. There's no place for that," he said.