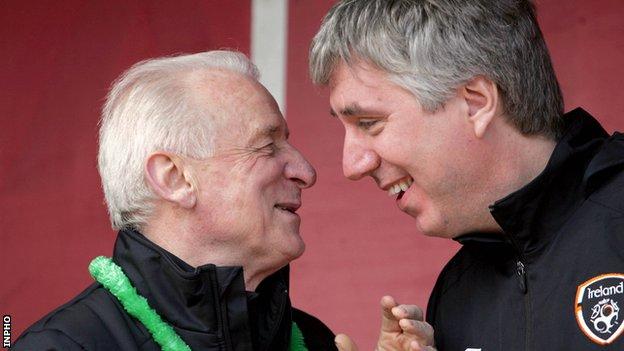 FAI Chief Executive John Delaney has confirmed the Association will have the financial clout to provide for a top quality Republic of Ireland manager.

Delaney revealed on Wednesday that businessman Denis O'Brien will continue to provide the resources, the Cork man having part-funded the wages of outgoing boss Giovanni Trapattoni.

The arrangement will continue for the next two years at least, said Delaney.

"We have the firepower to go to the market and get ourselves a manager."

Delaney claimed that the contracts of Trapattoni and his management team had been ended by "mutual consent" and at "no substantial cost to the Association".

Under a deal negotiated before the appointment of Trapattoni in 2008, O'Brien agreed to part-fund the wages of the Irish boss, at the time believed to be in the region of €1.7 million.

"Denis O'Brien has confirmed that he will continue to stick with this project for the next two years at least," said Delaney.

The FAI chief said there will be no hasty appointment of a successor to Trapattoni, however.

Martin O'Neill is the bookmakers' favourite, but Delaney insisted the Association will take its time to ensure it gets the right man.

"I think it's a time for reflection after a traumatic four or five days," he said.

"A board meeting will take place within the next week at which we'll define the process, time-scale and job description for the next manager."

"There was a lot of emotion in the room," he revealed.

"You've spent five-and-a-half years working with Giovanni, Marco Tardelli and Franco Rossi. It was a practical and friendly discussion that led to the decision to end the tenure of the management team.

"There was a lot of emotion when you're saying goodbye, but it's not goodbye forever. I'm sure at some stage in the future we'll meet up again. Giovanni is a good man - a legend in the world game and the manner in which he left was very dignified."