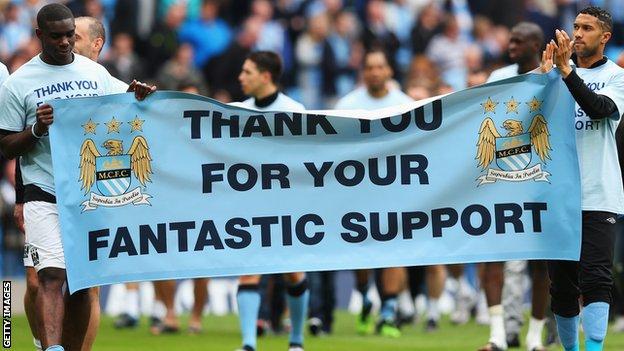 When asked to guess which club charges the most to watch Premier League football, Manchester City's name is never far from people's lips.

After all, the blue half of Manchester continued to spend big in the summer transfer window as they attempt to wrest the title back from neighbours United having won it for the first time in 44 years in 2012.

Not necessarily. In fact BBC Sport Price of Football shows City offer the cheapest season ticket in the top flight, at £299.

Their value gold season card, which gives no guarantee of a specific seat when purchased, is cheaper than the most affordable season ticket of three Conference Premier clubs.

The ticket is available on a limited, first-come, first-served basis but the intention at the Etihad Stadium is to bring affordable football to more of their supporters - with plans for a stadium development to take their capacity from just over 47,000 to as much as 60,000 in the pipeline.

"We are looking at the project in two phases - introduce 6,000 new seats in the South Stand as the first phase and then introduce another 6,000 seats in the North Stand as phase two. We are also keeping our options open that we may bring those together as one project," said head of infrastructure Peter Bradshaw.

"The season tickets we are looking at, the extra seats in each end, will start at £299. That is where we are targeting, to introduce more affordable seats to more fans. That is the intention of this and to provide a stadium with an incredible atmosphere that people who want to watch Manchester City can afford to come and watch."

The club are currently consulting with fans and the local community before making a formal planning application to Manchester City Council.

As well as offering the most affordable season ticket, City are also prominent in the match-day table, with their cheapest offering of £20 matched by Cardiff and only bettered by Newcastle, who sell a £15 ticket.

They do have a premium season ticket, priced at £780, while their most expensive match-day ticket costs £58, lower than only five other Premier League clubs.

The club insist they try to listen, though. Having sold the joint-most expensive cup of tea in last year's BBC Price of Football, they have cut the price by 70p to £1.80, only bettered by newly promoted Cardiff.

"The affordability is incredibly important because we want to fill our stadium, we want the fans to be enthused and excited about watching the best team in the Premier League.

"What we can't do is price people out. We have to really think about the commercial nature of this. Having affordable tickets is what works - making sure that local people can come and watch football week in and week out and it doesn't drain their pockets. Times are hard, we accept that, and we want to be sure they are getting a quality product, are incredibly well entertained and at an affordable price."

Ticket prices are a key factor for supporters, especially in an economic climate that has been far from certain in recent years.

But City believe value for money is determined by more than just cost.

"For us, as a club, it is very much about extending the match-day experience," said marketing manager Justice Ellis.

"We recognise, as a club founded by a family in the local area, how important value for money is.

"By having everything from enhanced experiences inside the stadium to a new catering partnership with Jamie Oliver adding choice, value and credibility, it is about extending those experiences beyond the 90 minutes, which is as important as what is happening on the pitch itself."

So what would the club say to those who point to their billionaire owner, Sheikh Mansour, and say with the money they have they can afford to do more with ticket prices?

"We have to be mindful of our own pricing structure and ultimately getting stability in our own right and becoming self sufficient as a football club," said director of sales, service and operations Danny Wilson.

"So all the different revenues contribute to that. While the TV revenues have gone up and we are doing pretty well with some of our sponsorship revenues, you have retail, ticketing and all these factors contribute to it. You have to find the sweet spot, the balance. We want a full stadium with people getting behind the team, to take us to where we want to be on the pitch.

"Obviously last year's study showed we were charging one of the highest amounts for a cup of tea and I think it shows we are listening to our supporters. It created a bit of a storm, being the most expensive, and we decided to look at that and bring it down to the price we have.

"There are a lot of things coming, which will be rolled out over the months. A key thing we focused on over the summer was City Square and making it bigger and better. We have a bigger stage and are really focusing on the live acts.