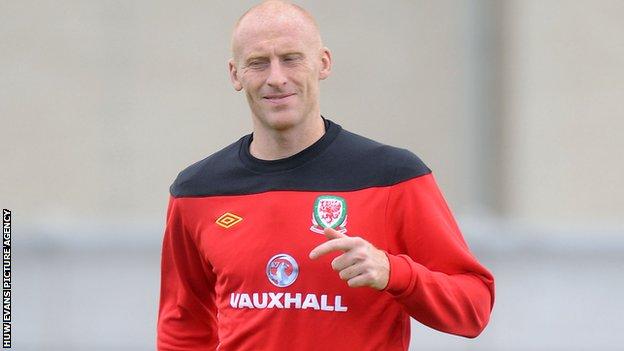 Defender James Collins has denied Wales boss Chris Coleman's suggestion that he refused to play for his country.

Coleman claimed the West Ham player rejected the chance to join the squad ahead of Tuesday's 3-0 defeat to Serbia after suspension and injury had ruled out Ashley Williams and Sam Ricketts.

But Collins said: "I was not contacted by Chris Coleman or anyone at the FAW to request I join up with the squad.

"Had I been asked I would have gladly represented my country."

Coleman opted for Swansea full-back Ben Davies to partner Crystal Palace's Danny Gabbidon, even though Davies had never played in central defence at a professional level.

"It has to mean everything to turn up to play for Wales - if it doesn't, then don't turn up," Coleman said.

"James explained to me that he didn't want to come into the squad after being on standby because psychologically he was disappointed. But that's not the attitude I'm looking for."

In a statement released on Wednesday, 30-year-old Collins said he felt "obliged to set the record straight".

He added: "I did have a conversation with Chris to try to seek clarification on why I had been left out of the initial squad for both the Macedonia and the Serbia matches - but at no stage did I state that I would refuse to play for Wales.

"I am proud to come from Wales and even prouder to pull on the red shirt of my country so the suggestion that I would ever refuse to play for them is plainly wrong."

The defeat to Serbia, coupled with Scotland's 2-1 win in Macedonia, left Wales bottom of their World Cup qualifying group with two matches remaining.