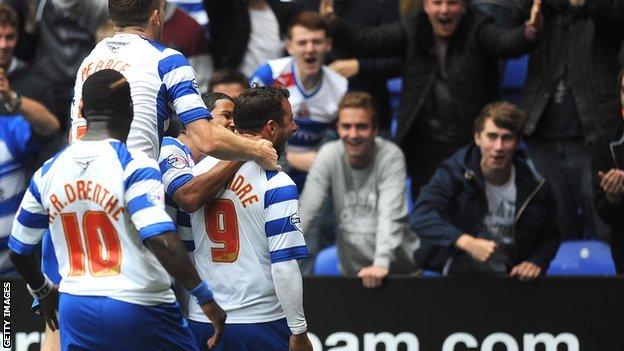 Leeds boss Brian McDermott endured an unhappy return to Reading, as Adam Le Fondre scored a 96th-minute winner for the Royals in the Championship.

The striker McDermott brought to the Madejski Stadium from Rotherham in 2011 converted from Royston Drenthe's free-kick to send his side seventh.

The chance came after Stephen Warnock received his second yellow card of the match for a trip on Le Fondre.

Luke Varney wasted the best chance for the visitors, who now sit 11th.

The hosts had seen midfielder Jem Karacan carried off on a stretcher after just nine minutes, appearing to twist his right knee when challenging Ross McCormack.

Danny Williams and Hal Robson-Kanu tested Paddy Kenny, but the Leeds goalkeeper pushed both strikes away.

Leeds midfielder Rodolph Austin had two opportunities, striking a free-kick over the bar and sending a 25-yard attempt narrowly wide - the only noteworthy efforts for the visitors, Varney's weak effort aside.

But the left-back's night turned sour when he was dismissed for his second bookable offence, and saw Le Fondre capitalise to give the hosts the three points.