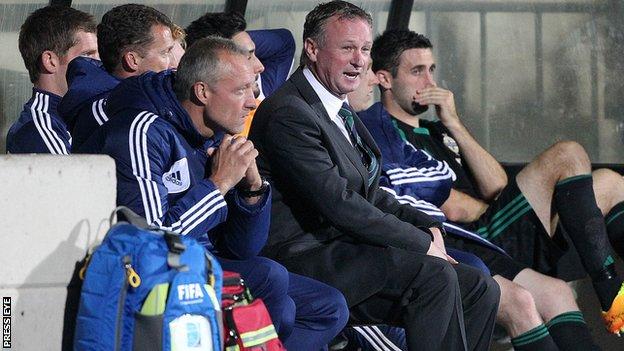 IFA president Jim Shaw has given his backing to Northern Ireland boss Michael O'Neill in the wake of the humiliating 3-2 defeat by Luxembourg.

Shaw wants O'Neill to remain for the 2016 European Championship qualifiers despite a record of just one win in his 12 games in charge.

"In Northern Ireland's case one result does not change anything," Shaw told the Belfast Telegraph.

"I still see him as the man to take us forward to the European Championships."

Northern Ireland's only win in the campaign was a memorable 1-0 victory against Group F leaders at Windsor Park last month.

O'Neill's men led Portugal 2-1 last Friday but it ended in a 4-2 defeat after Cristiano Ronaldo's treble and red cards for Chris Brunt and Kyle Lafferty.

Then came Tuesday's debacle as Luxembourg clinched a deserved win, just their fourth ever in World Cup qualifiers.

It leaves Northern Ireland fourth in the group but only ahead of Luxembourg on goal difference and a point clear of bottom team Azerbaijan.

"It was a very poor performance from us and particularly in the second half we lost it completely," added Shaw.

"It will go down as one of the worst results in our history because we were playing one of the nations that have always been considered of world football.

"However, I think you have to give Luxembourg credit because they have come on in recent years and they deserved to win.

"We have to do our best in the last two qualifiers and keep away from the bottom of the group and then after that we'll look forward to the European Championships."