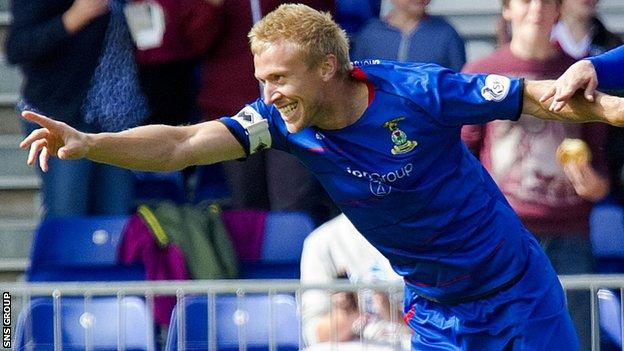 Inverness Caledonian Thistle captain Richie Foran is the SPFL's player of the month for August.

The 33-year-old midfielder helped the Highlanders claim top spot in the league on a five-game unbeaten run.

Foran scored in a 2-0 win at former club Motherwell and in a 2-2 draw away to champions Celtic.

"You can only pick up awards like this when your team-mates are doing the business and the manager is doing his job," Foran told BBC Scotland.

The Irishman was manager Terry Butcher's first signing for Caley Thistle in January 2009 and has made 173 appearances for the club.

"I'm really enjoying my football at the moment," he continued.

"It's been a cracking month for us. We've maybe had a few breaks going for us and we've no injuries.

"Everything is going for us but, for me, it's all down to hard work on the training ground.

"I've got huge belief in my team-mates around me and the guys on the bench.

"I know if I'm not doing my job someone can come on and replace me straight away, so I'm always looking over my shoulder and trying to improve."