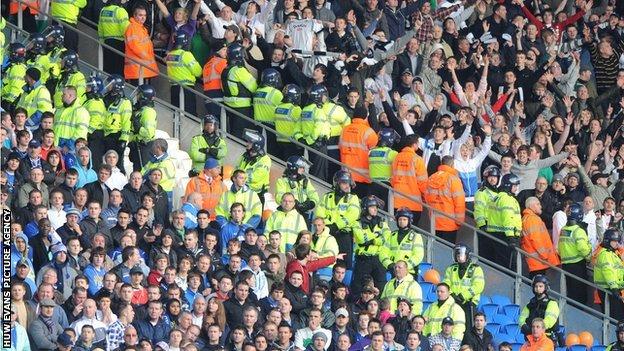 At £329 for their debut top-flight season, Bluebirds' cheapest season ticket is £100 less than Swansea's.

Cardiff, on their promotion from the Championship, and Swansea froze their season ticket prices ahead of the current campaign, reflecting the 50% of Premier clubs to have either done so or reduced their prices.

Cardiff's prices are the third-cheapest in the top flight, but the average cost of the cheapest season ticket at Premier League clubs has risen by more than 4%, with prices ranging from Manchester City's £299 to Arsenal's £985.

The same match-day spend at the Liberty Stadium is £43.20.

The BBC survey found the average price of the most affordable adult season ticket in the top flight has gone from £467.95 to £489.11 in the past year, with seven clubs raising prices this season.

Arsenal's cheapest season ticket was frozen in price at £985, the highest in the league, with Tottenham and Liverpool also charging more than £700.

The BBC Sport Price of Football survey looked at 166 clubs in 10 divisions across British football, including the Conference Premier and Women's Super League.

It found Manchester City offer the cheapest season tickets in the Premier League and are the only club to sell them for less than £300, with their £299 tariff the same as Conference Premier side Wrexham.

Newport County's cheapest season ticket on their rise to League Two is £270.

And while the lowest-priced entry to Rodney Parade has risen 38%, under-sixes go in for free.

The average prices of the most expensive season ticket and the highest and lowest match-day prices in the Premier League have fallen by up to 5.3%, though, following the general trend of a reduction in average prices across English football.

Manchester City have gone from having the most expensive cup of tea last season to, at £1.80, the joint-second cheapest in the division after Cardiff City, who charge £1.70.