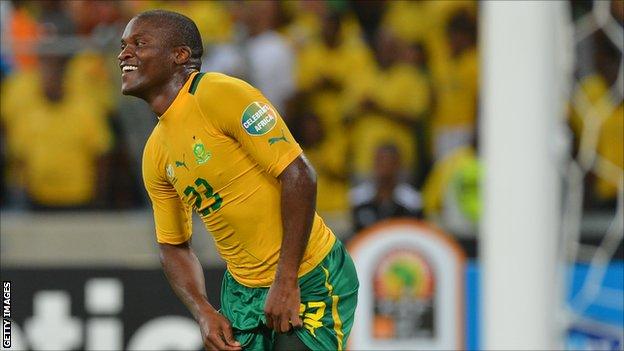 Bournemouth legend Steve Fletcher is confident record signing Tokelo Rantie will be a success at the Goldsands Stadium this season.

And former striker Fletcher is excited by his signing.

"It's a big stepping stone for Bournemouth to buy a player of his calibre and I think he'll produce the goods," Fletcher told BBC Radio Solent.

When I was in South Africa for the Cup of Nations, Tokelo Rantie was becoming a cult hero

The South Africa international was due to team up with the rest of the Cherries squad on Thursday for training, but his mother is currently ill and his debut for the club could now be delayed beyond Saturday's home match against Championship leaders Blackpool.

But Fletcher, the club's record appearance maker, says when he does arrive he has got the right qualities to do well.

"I like everything about him really," added Fletcher. "His passion, his desire to work hard for the team. He creates chances for everyone and his work ethic is second to none.

"He has a love for the game and he is an all-round player. I wouldn't pigeon hole him, he has lots of attributes and will bring a lot of energy to the team."

Fletcher, who scouted Rantie for the club for three months prior to his arrival, also dismissed suggestions the new signing would struggle to adapt to the Championship.

"Malmo are a very good club - Swedish clubs are as close to English clubs as you can get," he said.

"We see so many Scandinavians come over and they flourish because the style of football is similar. It's fast paced and he has so many attributes and I do think he will be a massive player for Bournemouth."