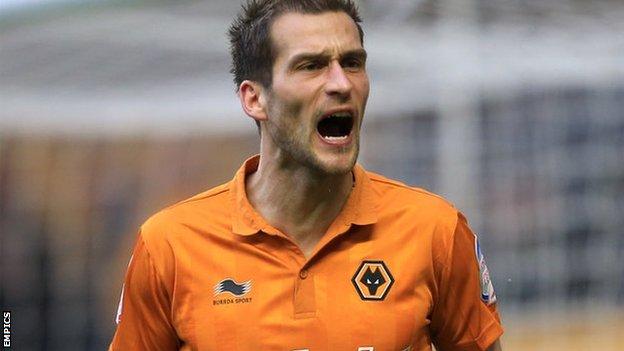 Sheffield Wednesday have agreed a deal to sign Wolves defender Roger Johnson on a three-month loan.

The 30-year-old has not featured for the Molineux club since their relegation from the Championship.

Wolves head coach Kenny Jackett told BBC WM: "The paperwork has not been done but it has all been agreed verbally. It means Roger can move on and play some football."

Johnson could make his debut for the Owls against Yeovil on Saturday.

Johnson is looking to avoid being relegated for the fourth consecutive season. The former Cardiff defender went down from the Premier League with Birmingham in 2010/11 and then followed that with back-to-back relegations down to League One with Wolves

He was transfer-listed at the end of last season along with midfielders Karl Henry and Jamie O'Hara and full-back Stephen Ward.

Henry left to join QPR, while Ward joined Brighton on loan, but Johnson and O'Hara - who are among the club's highest wage earners - have remained at Molineux.

Owls chairman Milan Mandaric told BBC Radio Sheffield: "We are in need of an additional two or three players and we're actively looking.

"Roger is a player we have been talking to and we're expecting that to be resolved very soon."

Wednesday are short in the centre-back position after skipper Anthony Gardner was ruled out with an Achilles injury and Martin Taylor joined Brentford on loan.

The move will see Johnson reunited with Dave Jones who managed him when the pair were at Cardiff.