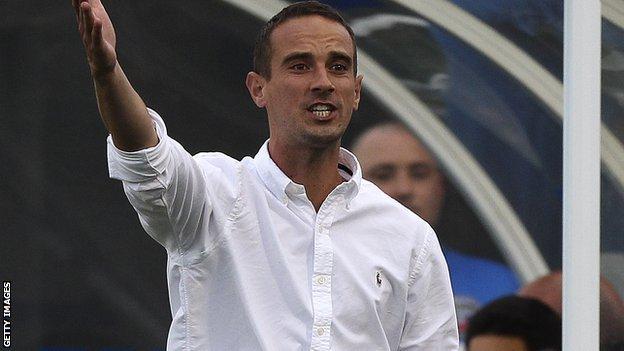 Bristol Academy manager Mark Sampson says his side are ready to challenge for the Women's Super League title.

Sampson's side will claim their first championship if they win their three remaining games against Birmingham, Doncaster Belles and current league leaders Liverpool.

"It's been a great achievement to put ourselves within striking distance of the title," he told BBC Radio Bristol.

"We're in a good run of form and we're really confident."

The race for the WSL title

Sampson added: "We need to be at our best to take it to the last game and we need to go in concentrating and giving it our all."

Bristol currently sit third in the table - two points behind Arsenal and five behind Liverpool but with a game in hand over both.

The Vixens travel to Merseyside on the final day of the season, in what could prove to be the title decider.

But Sampson's focus remains on Thursday's match at home to Birmingham, who they beat 2-0 in the away fixture.

"We've only got a few games to go now and one little mistake can be tough on any team," he continued.

"But we're playing well and understand what we are about. There's no reason why we can't go in to Thursday's match and give them a really good game.

"We know what a good side they can be and we have to be at our best to get the result we want."