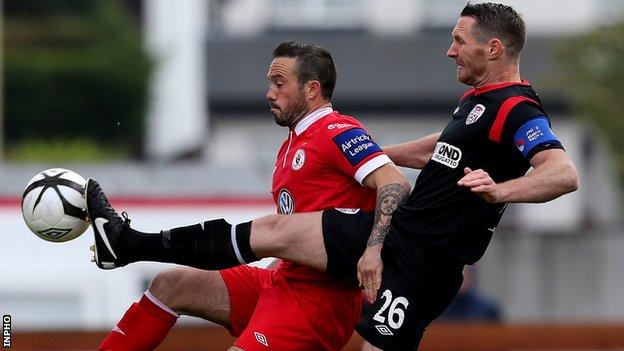 Holders Derry City were sent crashing out of the FAI Cup at the quarter-final stage after a 1-0 defeat by Sligo Rovers at the Showgrounds.

Raffaele Cretaro's first-half finish was enough to see the 2010 and 2011 winners into Monday's semi-final draw.

Declan Devine's men rarely threatened the defending league champions on a blustery day interrupted by a number of torrential downpours.

The result means Derry's last chance of silverware this season has gone.

Sligo, on the other hand, are still chasing a league and cup double.

The hosts deservedly went ahead after 14 minutes after Shane McEleney made a hash of a speculative Joseph Ndo through ball.

Cretaro still had work to do but with his back to goal, cleverly flicked the ball into the net at Gerard Doherty's near post.

Sligo had a glorious chance to double their advantage in the 58th minute when the excellent Alan Keane flashed a cross in from the right, but Danny North couldn't connect from two yards out.

The visitors improved in the second half, but could only muster two half-chances for Barry McNamee.

The fact that City failed to seriously test Gary Rogers in the Sligo goal - aside from two late Michael Duffy efforts - was merely indicative of Ian Baraclough's side's dominance.

Rovers, meanwhile, go in to the hat for Monday's semi-final draw alongside Shamrock Rovers, Dundalk, and either Drogheda United or Finn Harps.