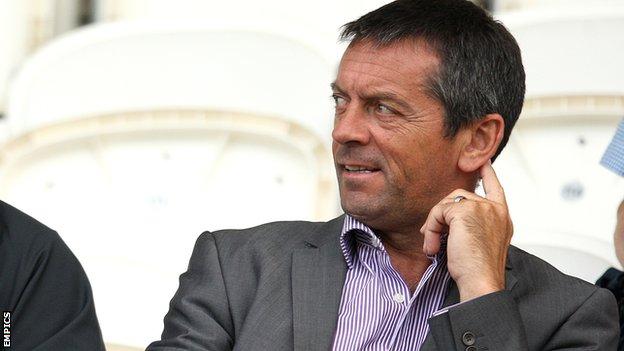 Southend United boss Phil Brown has revealed they asked all the other League Two clubs to switch matches at Roots Hall to Friday evenings.

This week's opponents Scunthorpe have obliged, as have five other clubs.

Brown hopes to enhance the atmosphere and maybe even attract supporters from Premier League side West Ham.

"You can't help but have an atmosphere when the lights are on. I used to love playing on a Friday night," the 54-year-old old BBC Essex.

"We put it to every club we're playing on Saturday that we want to play on a Friday. Only six have said they'll do it .

"We might get one or two West Ham fans down and bolster the crowd."

This season's home fixtures against Bristol Rovers, Fleetwood, Mansfield, Rochdale and Newport have also been switched to Fridays.

Last week's 3-1 defeat by Morecambe was a Saturday match, but Brown was more disappointed with what he believes was timewasting by the visitors, than the day of the week.

The Southend manager has raised the issue with Dave Allison, who oversees Football League referees for the Professional Game Match Officials Limited, the board that provides match officials for games.

"What I've done this week is brought to the attention of the PGMOL the tactics of the opposition to kill the tempo of the game," he said.

"Having looked at the Morecambe video, to be brutally honest I think their goalkeeper took 25 seconds for every kick.

"We have to bring it to the attention of referees and I spoke to Dave Allison about it and it hasn't fallen on deaf ears."