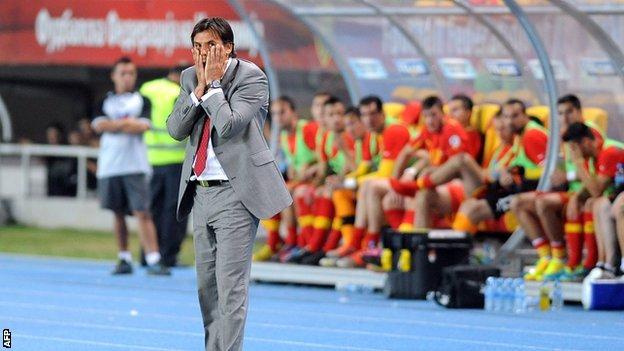 It's fair to say Chris Coleman has had better weeks.

From his passport mishap en route to Macedonia to the disappointing performance and 3-0 World Cup qualifying defeat by Serbia, I'm sure it has all left Chris thinking: "Where do I go from here?"

I fully believe the players are 100% committed to Chris, which says a great deal about his character

We are now rock bottom of Group A with just two wins in our eight group games, only scoring seven goals in the process.

We struggled massively against Serbia and from the very start we looked like a team that didn't have the belief that, without the likes of Ashley Williams, Jonathan Williams, Joe Allen and Gareth Bale (who started on the bench), we could go on and win.

The only time we ever threatened was after the introduction of Bale, by which time game was already lost with a three–goal deficit.

So where do Chris and the team go from here?

He has agreed a new contract with the Football Association of Wales, but as yet has not put pen to paper.

Will the FAW retract that offer in the next few weeks, thinking that Chris isn't the man to take Wales into the next qualifying campaign?

Personally, I don't think they will and I wouldn't be surprised if Chris signs his new contract in the next few days.

And I fully believe the players are 100% committed to Chris, however, which says a great deal about his character.

If he'd lost the support of his players then he might as well walk away now and let a fresh face take charge for the next European Championship qualifying campaign starting next September.

But I believe he should be given the opportunity to take us into that campaign.

He took over the job in the worst circumstances ever imaginable, and it took time for everyone to process the death of Gary Speed, hence the disappointing performances at the beginning of Coleman's reign.

Then there is the bad luck with missing players. Had Bale been fit in Macedonia I'm confident we would have won the game, and if everybody was available against Serbia there is no way we would have lost 3-0.

Chris needs his first-choice side for every qualifier if we are to have a chance of a successful qualifying campaign, because we just don't possess the strength in depth to replace the likes of Bale and Williams.

There are some important decisions to be made in the next few weeks, and let's hope the Welsh FA makes the right one for the sake of Welsh football.