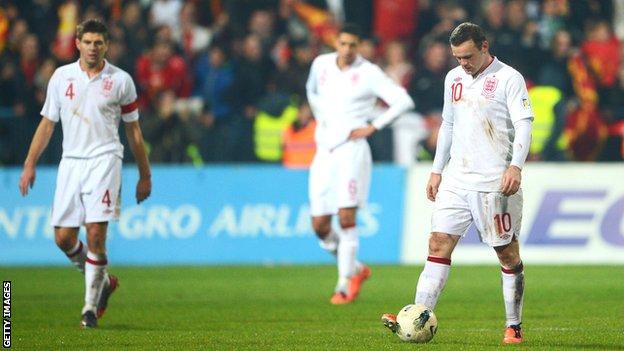 England have dropped to 17th in September's Fifa world rankings, their lowest position for 12 years.

The fall of three places puts them in a slot they have not occupied since the aftermath of Kevin Keegan's tenure.

Despite a quarter-final exit at Euro 2012, Roy Hodgson's side reached third in August last year - an all-time high.

Wales are 52nd, the Republic of Ireland 59th, Scotland 63rd, all having slipped further down the list, while Northern Ireland rose 23 places to 86th.

The Northern Irish improvement is particularly ironic given their ignominious 3-2 defeat this week by Luxembourg, who sit 127th in the rankings and whose last home World Cup qualifying victory had been in 1972.

Spain - who won the last two European Championships and the 2010 World Cup - have now held top spot in the table since September 2011, while Argentina moved up two places to second.

Uruguay have jumped into the top 10 after rising five positions to seventh.

Belgium's rise continued as they moved up to sixth - a four-place improvement - but the biggest climbers of all inside the top 20 were the USA, who leapt from 19th to 13th.